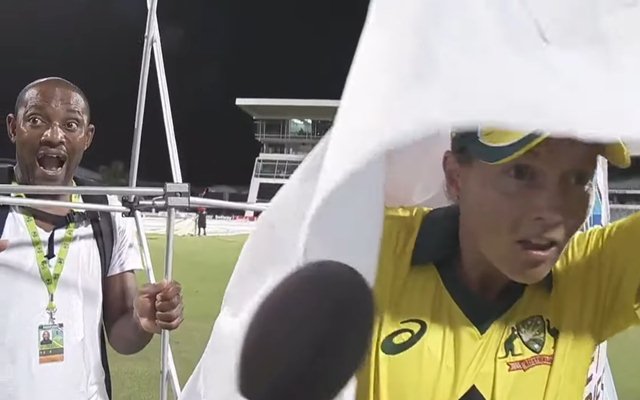 Australian women cricket team currently on the West Indies tour. The visiting team has completely dominated the hosts so far as they have won all the matches played in the tour. Southern Stars whitewashed Windies in the ODI series by 3-0 and have also won the first 2 matches of T20 series. Final T20 to be played on 19th September.

Likes of Ellyse Perry, Alyssa Healy, skipper Meg Lanning and bowler Megan Schutt have starred in the tour. Elyssa Healy was the top run-scorer of ODI series with 241 runs in 3 matches. Meg Lanning and Ellyse Perry follow the list with 1179 and 178 runs respectively. No.1 women all-rounder Perry also struck 5 wickets in the series, Megan Schutt picked 5 wickets as well.

Meanwhile, a funny incident happened after the 2nd T20 match during the presentation ceremony. Australia captain, Meg Lanning was talking to the presenter. During the conversation, thanks to the strong wind, the sponsors’ advertisement board which was placed right behind them got hit on the head of Lanning.

The incident was captured by the camera and the Australian team player Megan Schutt posted the video on her twitter handle. After 2 T20 matches, Lanning has scored 76 runs, Healy is the 2nd best with 70 runs. Megan Schutt also has 4 wickets in the series.