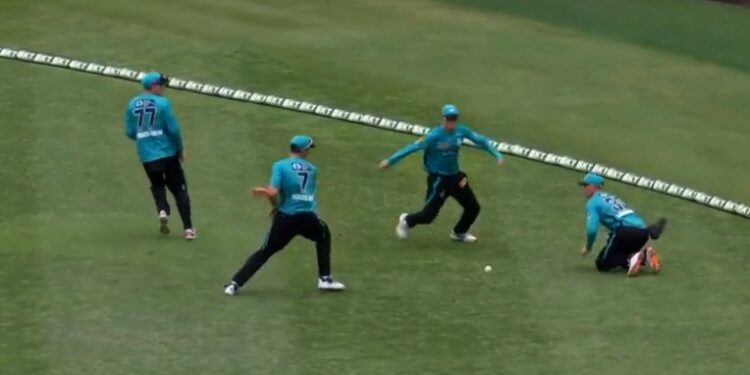 In the 51st game of the Big Bash League 2023 between Melbourne Stars and Brisbane Heats one of the funniest incidents on the field was caught on camera. Watch BBL 2022-23: Four fielders make effort to field the ball; still misfielded.

The Big Bash League 2023 is coming to its end and the season has been full of thrilling action. On the 22nd of January, Brisbane Heats were hosting Melbourne Stars in the second-last league game of their season.

Brisbane Heats won the toss and elected to bat first at the Gabba. Heats put on a commendable target of 188 runs on board with the help of Sam Hain’s unbeaten 73 off 41. Stars in reply started off well thanks to Tom Rodgers quick fire 41. For Stars, Joe Clark’s struggling innings of 31 runs off 31 balls cost them the match.

Marcus Stoinis and Hilton Cartwright did their best to pull off the chase but they fell short of 4 runs in the end. During the start of 2nd innings, a very funny incident happened on the field.

In the 3rd over of the second Innings Rogers played a balanced punch through the covers and the fielder placed towards the extra cover position started the chase. Along with the extra cover fielder, the point fielder and the man stated at mid-off joined the chase as well.

The chase became even funnier when the fielder standing in the deep point area also joined them. It was a very rare sight at the field as not more than 2 fielders are seen chasing the ball racing towards the boundary usually.

In the end, Matt Kunehman threw the ball and stop the openers from taking four runs.

The Heat are having a very important game coming up this week on the 25th of January. Their last league game will decide their future in the BBL 2023. Brisbane is currently sitting in the 3rd position in the points table with 13 points. If Sydney Thunders and Melbourne Renegades win their last games and Brisbane lost against Hobart on Wednesday then their Semifinals hopes will be shattered.

WATCH VIDEO: PAK Women’s batter Nida Dar pulls out after bowler releases the ball; Netizens give her Out

Brisbane Heats will be playing a must-win game in Launceston on Wednesday. A win will score their place in the Semifinals of the BBL 2023.