In-form Temba Bavuma got run-out for eight, courtesy of a brilliant throw from KL Rahul. 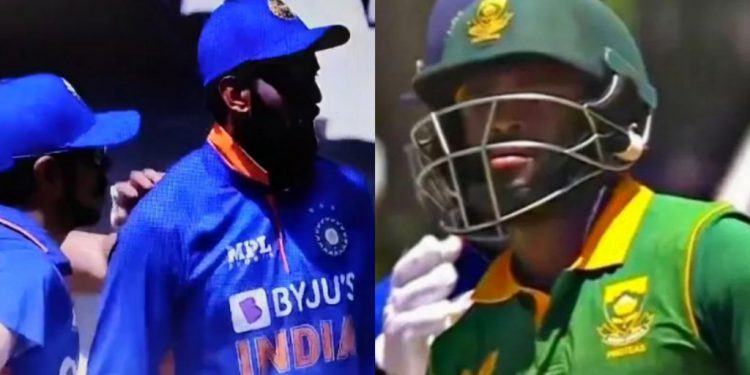 After losing the initial two ODIs of the ongoing series against South Africa, the Indian team is currently involved with the hosts in a dead rubber. Opting to field after winning the toss, India’s quicks gave their side a good start with Deepak Chahar providing a breakthrough in the third over of the innings.

As in-form Temba Bavuma walked in next, the pacers tightened their length against the right-handed batsman. With runs not coming at a good pace, the South African captain charged to take a risky run after mistiming a stroke hit straight to KL Rahul.

Rahul threw the ball straight at the stumps as the bails lighted up. While the Indians did not seem to be much confident, the replay at giant screen showed that Bavuma had failed to make it to the popping crease in time by an inch or two.

As Bavuma was walking back to the dressing room after scoring eight runs, he was barraged with abusive words from the visitors. Interestingly, former India skipper Virat Kohli was seen sledging Bavuma in the second ODI of the series as well.

Talking about the match, India made a comeback after Quinton de Kock’s onslaught. From 214/3, South Africa were reduced to 228/6. While Deepak Chahar came out as the star performer with the new ball, Jasprit Bumrah and Yuzvendra Chahal provided wickets in the middle overs when the game was moving out of India’s reach.

ALSO READ: ‘Ya I have seen Pant, everyone wears it’ – Urvashi Rautela trolls Rishabh Pant and his fan

At the time of writing, South Africa are sitting at the score of 257/6 with five overs left in the innings. After Quinton de Kock’s 124-run knock, David Miller is continuing with the show and is batting on 21 runs along with Dwaine Pretorius.