Rishabh Pant was the only player on the field who appealed desperately against SA batter Rilee Russouw. 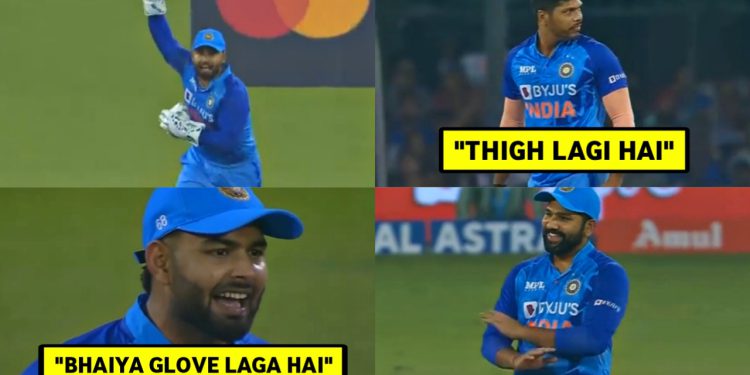 For the unversed, South Africa and India were locking horns for the 3rd and final T20 international of the 3-match short format series hosted by India.

The game took place at Holkar Stadium, Indore, and turned out to be a rollicking run-fest.

Rishabh Pant tries to persuade Rohit into consuming a DRS

The visitors got off to a decent start after Bavuma fell as wicket-keeper batter Quinton deKock returned to form.

Left-hander Rilee Russouw, who made his int’l comeback for SA after the scrapping of the Kolpak deal joined QdK at the crease after Bavuma fell to Umesh Yadav on the 1st ball of the 5th over.

The 3rd delivery of the same over brushed Rilee’s right thigh as the batter was late into his glance. Umesh voiced a token appeal but then went back to his run-up, pointing to his thigh.

However, the keeper was pretty serious in his appeal and kept on appealing for a long while.

Rishabh Pant even tried to persuade skipper Rohit Sharma into using a DRS, insisting the noise came off the ball brushing the batsman’s glove.

Regardless, Rohit was assured that it had deflected off Russouw’s thigh and laughed it off suggesting the same.

Had Rohit Sharma actually consumed a DRS on the persuasion from Rishabh Pant, it’d have been a howler and a total waste of a review from the Men in Blue as there was daylight between bat and ball.

Coming to the match itself, India lost the game by 49 runs chasing the mammoth 228-run target set by the Proteas.

Russouw, having survived the DRS appeal from Rishabh Pant on 0 went on to score his 1st T20I hundred off just 48 balls, smoking 7 fours and 8 maximums.

In reply, India were bowled out for 178. Dinesh Karthik (sent at 4) and Rishabh Pant (opening the batting) scored 46 and 27 each.

Though the margin of loss looked to be much bigger, a Deepak Chahar (31 off 17) cameo helped India eat off more runs.

Pretorious was the pick of the SA bowlers and took 3 wickets while Russouw’s 100 earned him the Man of The Match award.