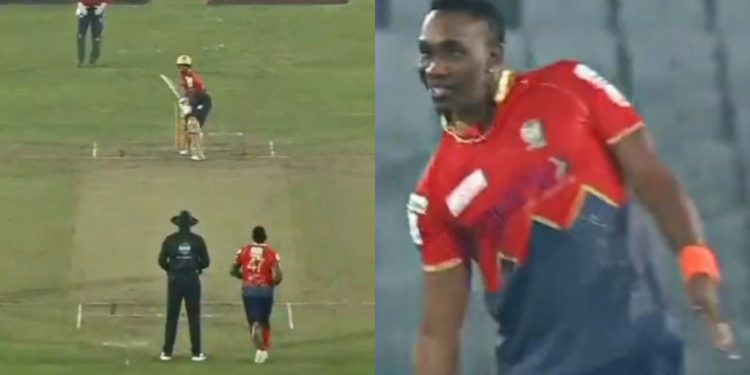 The 2022 edition of Bangladesh Premier League kickstarted on 21st January and eight matches have been played so far. The Comilla Victorians and Fortune Barishal faced off on Tuesday with the Comilla Victorians coming on top at the end of the game. However, the celebration by Bravo caught the fancy of the fans as DJ Bravo celebrates a wicket with Allu Arjun’s ‘Srivalli’ dance steps.

DJ Bravo celebrates a wicket with a dance step

The Fortune Barishal skipper Shakib Al Hasan opted to bowl first and they restricted their opponent to 158. In reply, the Fortune Barishal faltered and were all-out for a paltry 95, losing the match by 63 runs. Though the team couldn’t achieve the target, the all-rounder DJ Bravo hogged the limelight for celebrating a wicket with Allu Arjun’s ‘Srivalli’ step from the movie Pushpa.

The dance step by DJ Bravo came in the 18th over of the first inning when DJ Bravo claimed the wicket of Mahidul Islam Ankon. Bravo bowled a short ball around the middle and leg and the batsman struck the ball hard, but couldn’t clear the fielder at deep mid-wicket. Following the wicket, DJ Bravo celebrated it with the signature step of the song ‘Srivalli’ from the movie Pushpa.

The celebration by the cricketer was really interesting and the fans around the world loved it. As for the match, Bravo’s team ended on the losing side, unfortunately. The batsmen couldn’t perform to their potential and eventually, the team lost the match. The victory led the Comilla Victorians on the first position with 4 points while the Barishals are on the last position on the points table.