During 3rd day of series decider Test match, Dean Elgar was on the receiving end of Captain Kohli's aggresive taunts. 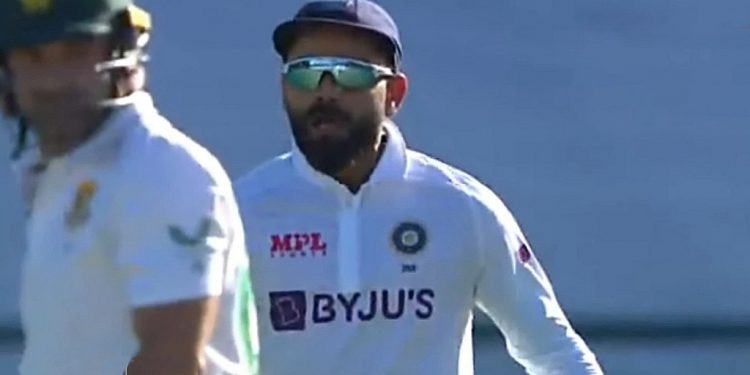 India’s pride had taken a heavy toll after 2nd test’s defeat at the hands of Elgar-led RSA side. Their batting lineup had crumbled and stand-in captain KL Rahul’s lack of authority had come under the scanner since he couldn’t manage his bowlers effectively.

In short, King Kohli’s comeback as the test skipper couldn’t have arrived at a better time. Rahul Dravid’s battalion had missed their leader and best batter a tonne, and his influence was eminent in both the fields upon his return.

Skipper Kohli scored 79 gritty runs in the first innings, and later- showed his trademark aggression via a barrage of sledge-comments aimed at Dean Elgar.

Eh. Let’s get to the point. India needs to defend 109 runs today if they are to fulfill their desire of a test-series victory in South-African lands. A few hours ago, they had 210 in their kitty. However, RSA skipper Dean Elgar fed on it.

En route their road to 101 for 2, the hosts were 39 for 1 at one point. In other words, they dangled by a thread for if a couple of batsmen had crumbled back then, India had this game in their hands. Reading the match situation, Elgar and Petersen were seen decreasing their on-pitch time by taking lengthy breaks between over changes, and even mid-over.

Being the uber-cool personality that Kohli is(sarcasm intended), he got enraged by it -and by launching a verbal attack on his RSA counterpart- made sure his frustration didn’t go unnoticed. Here’s the video of Skipper Kohli giving Elgar some real treatment. Courtesy: Stump Mic.

Later, when he(seemingly) tried to shut him down, Virat reminded him that he’s been this sledge-lover for 13 years. “Chirping for 13 years Dean. You think you are gonna keep me quiet?”

Cheeku also reminded the southpaw about how his side once had a day’s play called off due to “bad pitch” back in 2018. For those who are not aware, the then-pitch’s inconsistent bounce had Elgar smacked flush by Jasprit Bumrah.

India had eventually managed to win that game by 63 runs, scalping South Africa’s last 9 wickets for just 53 runs. Dean Elgar had top-scored with his unbeaten 86 while Jasprit Bumrah took seven wickets during that match.