Virat Kohli and co. were, understandably, not impressed with the ball-tracking technology in use. 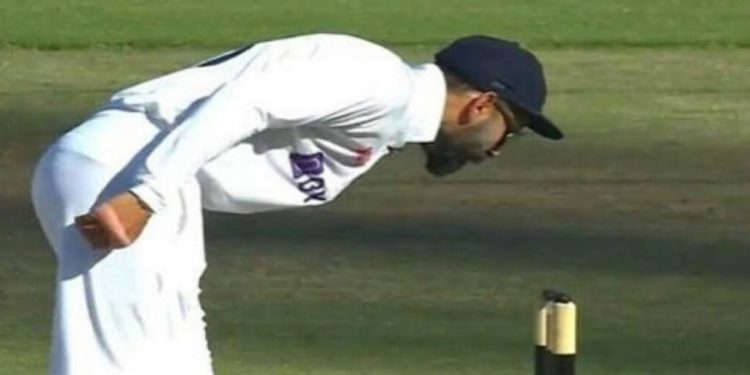 The ongoing test series between India and South Africa has had its fair share of spicy banters. The first and the second game of the series had plenty of tempers flaring between Jasprit Bumrah and Marco Jansen. The third test match, however, has seen South Africa captain, Dean Elgar, as the primary target for verbal volleys from India players.

Elgar, the target of verbal volleys from Indian players

It’s hardly difficult to understand why Elgar, the most experienced and pedigreed batsman in this young South Africa team, has the spotlights fixated on him as the player to watch out for. His stellar unbeaten knock of 96 in the second test match was what allowed South Africa to register the series-equalizing win.

Even in the current match situation, he provided a stable anchor at one end while allowing Keegan Petersen to keep accelerating the innings. He has been dismissed now, much to every India fan’s joy- but it seems as though the damage has already been done.

Virat Kohli and co. made a concerted effort all through the day to keep getting under Elgar’s skin with their incessant chirping. At one point, Kohli even referenced to the India-South Africa face-off in 2018, where a continuous assault of bouncers from Jasprit Bumrah made Elgar ‘complain’ to the umpires to call off the game early. Talk about fierce banter!

But the highlight of the day arrived when Ravichandran Ashwin nearly managed to trap Elgar LBW plumb in front of the stumps…only for the ball-tracking replays to show that the ball bounced to quite a height above the leg-stump! Even standing-umpire Marais Erasmus couldn’t quite believe what was happening. He was seen shaking his head and caught on-mic saying, “That’s impossible”.

We’ll let you figure that out for yourselves by presenting this clip of an animated Virat Kohli. In the video, he can be heard saying, “Focus on your team as well and not just the opposition. Trying to catch people all the time”. Moments later, vice-captain KL Rahul also walked up to the mic, and added: “Whole country playing against XI guys”. Here’s the video:

Ok Ok.. This is getting tense and hot out there.. Elgar trapped LBW… Erasmus gave it OUT!! but hawkeye shows its going over.. Kohli kicks the turf in disgust.. Ashwin goes near stump mic and says don’t do that supersport… Kohli goes near the stump pic & tells something #IndvSA pic.twitter.com/RWKRd37Lg4

It remains to be seen if and how the match-officiating committee reacts to Kohli and Rahul’s candid stump-mic chatter. For the time being, however, team India would be eager to start tomorrow’s day on a positive note and strike with some quick wickets upfront. With Elgar gone, the South African batting appears quite vulnerable. A couple of quick wickets could drastically turn the game in India’s favor.