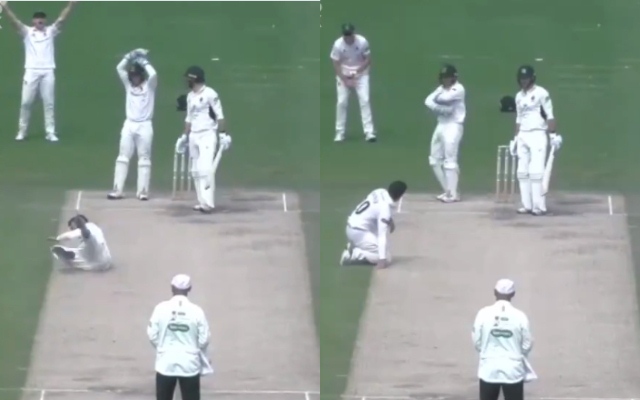 Leg Before Wickets (LBW) always creates some excitements among bowlers while they supposed to appeal for the wicket. However, we have seen many funny appeals so far in cricket history. But the video which has recently gone viral on Social Media will make you laugh harder. The incident took place during the ongoing County Championship Division 2.

During a game between Sussex and Middlesex, Tom Haines became a stock of Laughter for the fans and his teammates. Meanwhile, he made a hilarious appeal in front of the umpire which results in a most bizarre scene. Actually, he was running back and appealing simultaneously, which falls him in the ground.

Tom Haines bowled an inswinger and the ball struck on the batter left leg. However, the bowler went up in appeal and the appeal was so aggressive that bowler fell over.

Also Read: Anil Gurav The Man Who Was Better Than Sachin, Today Lives In A Slum

This all happened in a match of County Championship Division 2

However, in the match, Sussex has defeated Middlesex comfortably by seven wickets at the County Ground in Hove.

Tom Haines is 20 years old English young Player. So far in his county career, Haines has scored 127 runs at an average of 15.87 and also picked up four wickets.