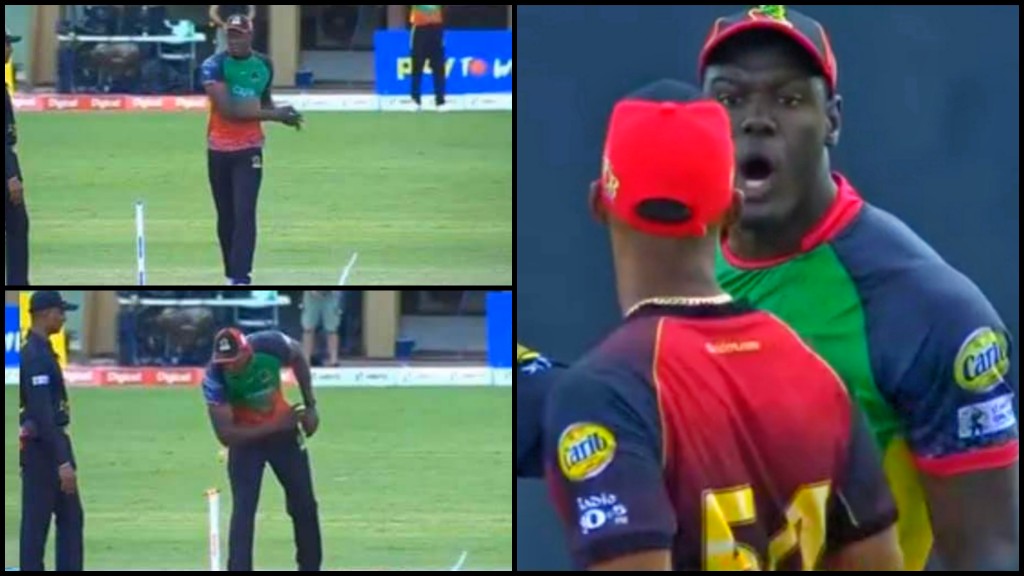 CPL 2019 has reached its final stage. Only two matches are left in this season, qualifier 2 and final. Guyana Amazon Warriors won the qualifier 2 on Sunday and reached the final. Interestingly, the Guyana team has won all the 11 matches it has played in this season so far.  Qualifier 2 on 10 October will decide the 2nd finalist of the season. Qualifier 2 to be played between Barbados Tridents and Shah Rukh Khan-owned Trinbago Knight Riders.

However, on Sunday, in the CPL 2019 eliminator match between Trinbago Knight Riders and St Kitts and Nevis Patriots, we witness a hot moment. Patriots skipper Carlos Brathwaite and Tribago’s Lendl Simmons got involved in a spat.

The incident happened TKR were at 35-3 after 7 overs while chasing 126. Fabian Allen bowled the 8th over and Ramdin and Simmons were at the crease for TKR. Ramdin played one of the deliveries in the over towards square. Batsmen ran a single and after the ball dead, both batsmen left their crease for a chat.

This annoyed Brathwaite and he took the ball, took the bails off and appealed for a run-out. However, the umpire turned down the appeal, as the ball was no longer in play. But, Braithwaite didn’t remain in calm and diverted his attention to Ramdin. Following, Lendl Simmons jumped into the spat and exchanged few words. Brathwaite dished the abuse back in an equal manner. Umpire stepped in to separate both players. Wicket-keeper Devon Thomas put the ice on the matter as he had a friendly talk with Ramdin.

However, the drama created by Brathwaite didn’t work and Trinbago won the match by 6 wickets and knocked out Patriots from the tournament. Kieron Pollard led Trinbago will face Jason Holder’s Barbados Tridents in the second qualifier. The winning team will face the unbeaten team in the tournament Guyana in CPL 2019 final.