CSK vs MI: Umpire under pressure changes signal from wide to out following loud appeal from MS Dhoni & co.

Umpire changed his mind after a loud appeal from CSK players. 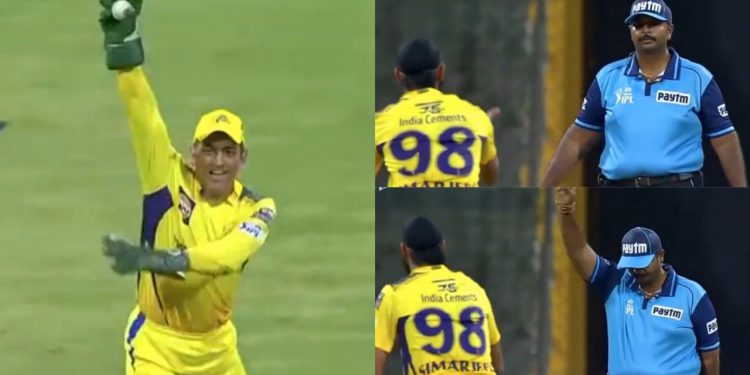 Chennai Super Kings and Mumbai Indians produced yet another interesting game at the Wankhede Stadium on Thursday. Even though it was a low-scoring game and more so becuase MI in tenth and CSK in ninth place of the points table, the two teams gave an interesting fight. However, during the match, MS Dhoni stole the show with his skill and umpire Chirra Ravikanthreddy was convinced by his appeal too.

Notably, the umpire was seen giving a signal for wide but then instantly changed and signalled it for out as well. It happened during the 6th over of Mumbai Indans’ innings when Simarjeet Singh bowled a beautiful inswinger and Hrithik Shokeen got a nick of it.

The batsman although was very confident and asked for a review directly. After the referral, third umpire Nitin Menon saw that the ball had nicked the batsman’s waist, thus the sound came as well. And, that could’ve been the reason why everyone and especially skipper MS Dhoni was seen appealling for that.

Although the umpire’s decision was overruled, fans on Twitter couldn’t keep calm as they said that the umpire supposedly changed his decision after seeing MS Dhoni was confident with his appeal.

Here is how fans reacted to the appeal of MS Dhoni:

Umpire raised the finger only because of dhoni there 😭🤣

This is purely Dhoni's wicket😂
Umpire while giving wide, saw dhoni appealing and raised one hand and gave out to that extension to that wide🤦🏻‍♂️

I swear, the umpire wanted to give wide and then saw Dhoni appealing and gave it out.

However, after the match, which Mumbai won, CSK captain MS Dhoni said: “Irrespective of how the wicket is, anything below 130 is difficult to defend, but what I asked the bowlers was to show a lot of character and forget about the result. Both the young fast bowlers bowled really well and I feel a game like this really helps them in believing in themselves that irrespective of the conditions, whenever we start we need to have the same kind of attitude and that’s what is needed in the shortest format.”

“We have gone through periods where we never really had that extraordinary bench of fast bowlers. Also fast bowlers they take their time to mature, if you are lucky you get somebody who can feature in all formats in six months time and that is what IPL is doing and it is an opportunity for a lot of them. They bowl a bit courageous now which is very important in a format like this. And some players take their time before executing their plans better,” MS Dhoni concluded.