The India Women Team seamer Renuka broke the backbone of Barbados batting line-up by picking 4 wickets inside the powerplay. 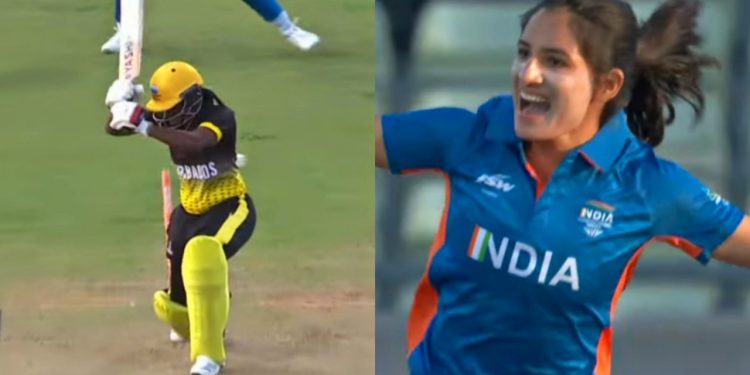 Barbados’ chase of 163 in their last game of the Commonwealth Games 2022 came crashing down in the first over itself as their skipper Deandra Dottin departed for a duck. Following her dismissal, Renuka Singh Thakur and co. struck at regular intervals throughout as the opponents failed to build a single substantial partnership.

Earlier, a collective batting effort from Jemimah Rodrigues, Shefali Verma and Deepti Sharma had helped Indian Women Cricket Team put a competitive target on the board.

The wicket of Barbados captain Deandra Dottin was the first of many that Renuka Singh scalped in an impressive swing and seam spell that read 4-0-10-4.

The second wicket for her came in the third over as Matthews failed to clear mid-on and the third one came from a play-on from Kycia Knight. Barbados struggled at 3 for 19.

However, Renuka Singh Thakur still had a ripper in her pockets that came in the form of an in-swinger which reminded fans of the first ODI-career ball from India Men superstar Bhuvaneshwar Kumar.

This inswinger reminds us of @BhuviOfficial wicket of Hafiz

This bowl was a treat to watch.
Not comparing but reminded of bhuvi

The delivery from Renuka Singh Thakur pitched on a length outside-off and Barbados batswoman Aaliyah Alleyene offered no shot to it thinking that the delivery would hold its line. Nonetheless, it nipped back in sharply to smash right into the stumps and dismissed the Barbados batter.

Bhuvaneshwar Kumar had dismissed Mohammed Hafeez in an extremely similar fashion off his first-ever ODI delivery on December 30, 2012.

Coming back to the match, Renuka Sigh found able support in Meghna Singh, Harmapreet, Sneh Rana and Radha Yadav- each of whom took a wicket apiece.

The others also kept it solid to restrict Barbados to 8 for 62 as India registered a comprehensive win to end second in Group A of CWG 2022 and qualified for playoffs.

India Women Cricket team is set to go against either of New Zealand and England in the historic Commonwealth Games 2022 semi-finals game at Edgbaston, Birmingham.