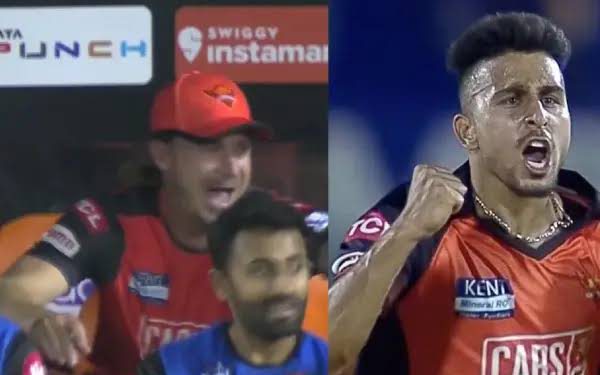 SRH skipper Kane Williamson won the toss at the Brabourne Stadium in Mumbai and asked KKR to bat first. Australian limited-overs captain Aaron Finch made his first appearance for his new team this season.

However, Finch failed to live up to the expectations as he nicked Marco Jansen’s outside off pitched delivery to walk back to the dugout early in the innings.

T Natarajan claimed a couple of wickets in the fifth over as KKR were brought down to 38 for 3 at the end of powerplay.

Shreyas drove Jansen through mid-on for a boundary and later swept Jagdish Sucith for another four. Before Iyer could accelerate his innings with his intrepid strokeplay skills, Umran cleaned the KKR skipper up.

Steyn was thrilled with Umran’s execution of the perfect yorker and had a big laugh along with spin bowling coach Muttiah Muralitharan in the dugout to celebrate the big wicket.

Umran dismissed KKR wicket keeper Sheldon Jackson in his next over just after he got pummeled for a six by the same batter.

“Never lose pace. Anyone can bowl 130/135. But yes, some variety in his skills will take him a long way forward,” Steyn wrote on his Twitter handle while responding to a user’s query on Umran Malik.