DRS goes unavailable in IPL match due to powercut at Stadium; Devon Conway walks back despite being not-out

The CSK batter was not able to take the review and it turned out to be an unfortunate dismissal. 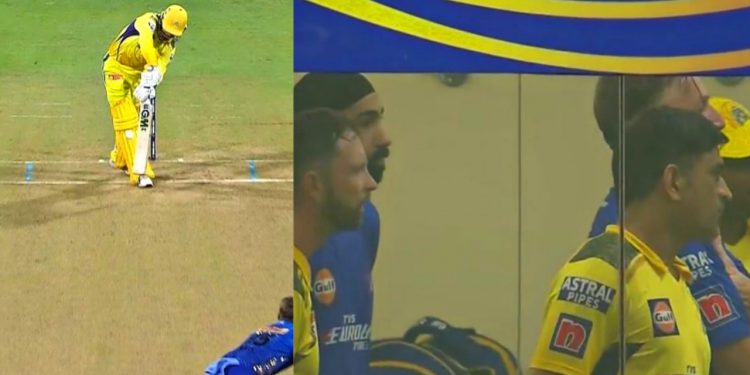 In the ongoing CSK vs MI match, the second delivery of the first over struck Devon Conway’s pad. A huge shout came from the MI side including the bowler Daniel Sams. Umpire immediately raised his finger, however, it was a close call and the CSK batter chose to take the DRS. But, the on-field umpire refused to go upstairs after conversing with Rohit Sharma and Conway. The fans ask why there is no DRS available in the MI vs CSK, IPL match.

DRS go unavailable in IPL due to Powercut at Wankhede Stadium

DRS was not in play for the first few overs due to a power cut at Wankhede Stadium. The unavailability of the technology in this short time cost the Dhoni-led side as the leg-stump was clearly missing in Conway’s case. When the technology returned in action, Chennai Super Kings had lost three batters; Conway, Moeen Ali, and Robin Uthappa.

Uthappa too dismissed as LBW and wanted to review but again couldn’t use it. The fans were amused and frustrated as things like these are happening at the biggest stage of the game. The unfortunate dismissal of the CSK opener was followed by a series of wickets and they had lost 6 wickets at a marginal score of 50 runs.

ALSO READ: Amid rift rumours, CSK-CEO reveals why they released Ravindra Jadeja from the squad

Mumbai Indians are already out of the tournament and they want to give young players chances in upcoming games. On the other hand, a loss from here will officially sideline Chennai from the playoffs race. Winning the rest of their matches also doesn’t guarantee them a spot in the top 4.