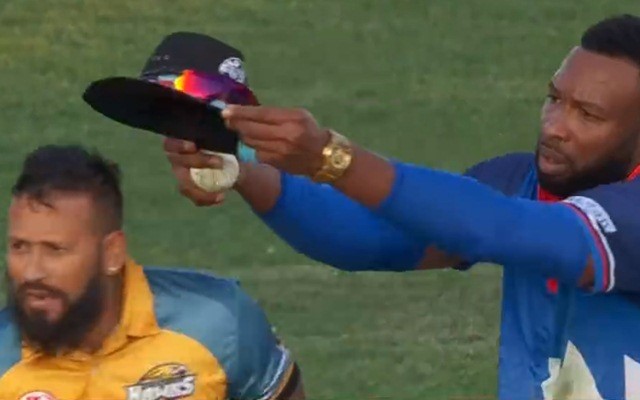 The 2nd season of GT20 Canada League is at the end-stage. Yesterday, Rayad Emrit-led Winnipeg Hawks beat Yuvraj Singh’s Toronto Nationals in eliminator match and secured their place in Qualifier 2 match. During the chase, Kieron Pollard created a dramatic moment.

Hawks were chasing a Nationals’ mammoth total of 238 runs. In 16th over Pollard bowled a bouncer to Rayad Emrit after conceding 14 runs off first 4 balls. The ball went over batsman’s head and the umpire called it wide and also signalled it to be the first bouncer of the over.

In next ball, frustrated Pollard again tried a bouncer which struck Emrit’s shoulder and batsmen completed a run. Rayad was expecting umpire to call it a no-ball as according to him it was the second bouncer of the over. But, the umpire didn’t call it the second bouncer. Following this Rayad Emrit started arguing with the umpire and Kieron Pollard wasn’t happy with this. He hilariously took umpire’s hat and put it over batsman’s head stating that he should be the umpire in that case.

But Rayad was clearly unhappy with umpire and Pollard. Later the matter cool down after Pollard had a friendly chat with him. West Indies all-rounder conceded 19 runs off that over. Although, Hawks won the rain-affected match by a close margin of 2 runs by DLS method.

So, after this loss, Yuvraj Singh’s Toronto National knocked out of the league. Pollard had joined the team after having a great T20I series with the bat against India.

Now only two matches are left in GT20 Canada League. Vancouver Knights have confirmed their spot in the final while Brampton Wolves and Winnipeg Hawks will face each other in the qualifier 2.

Interestingly, Vancouver Knights had won the first season of GT20 Canada League in 2018 under Chris Gayle’s captaincy. It is the result of Gayle’s destructive batting that once again the team will play the final. But, Gayle will not be the part of the team in final as he is playing ODI series against India.