The ZIM vs BAN T20 series decider will be played at Harare Sports Club on Tuesday. 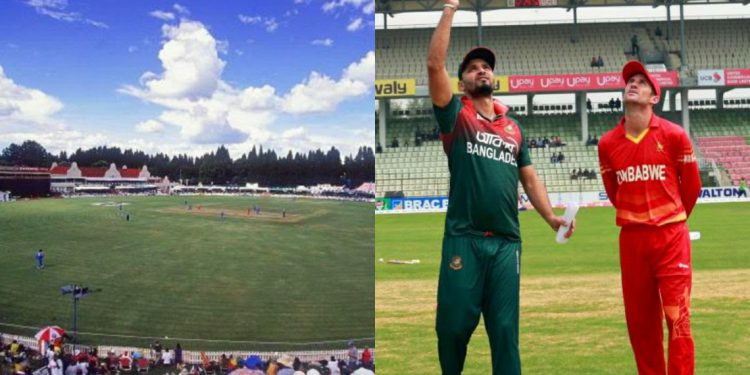 The ongoing 3-match T20 series between Bangladesh and Zimbabwe is turning out to be a good contest as the series has been leveled 1-1 and the final T20 has turned out to be a decider. The 3rd T20 as well will be played at the same venue as the first two games. Hence, the Harare Sports Club Pitch Report for the ZIM vs BAN 3rd T20 has been discussed ahead in the article, with the T20 records of the venue.

The Bangladesh side, who haven’t won a single bilateral T20 series since the T20 World Cup last year, would be looking to grab their chance this time. The hosts, on the other hand, who just qualified for the upcoming T20 World Cup last week, would be looking forward to continuing their good form in the shortest format of the game and winning their first bilateral T20 series after almost a year. It would also be for the very first time if Zimbabwe manages to win the T20 series against Bangladesh.

The T20 Records of the Harare Sports Club suggest that the teams batting first generally end up as the winning side here. Out of a total of 34 matches played at this venue, 22 have been won by the teams setting a target.

The pitch at the Harare Sports Club ground is a good batting surface where usually big totals are seen getting scored. The pacers will have to toil hard on this pitch in order to restrict the batting team to a below-par total. However, if the batters spend some time on the pitch, it’ll become easier for them to score runs here. Anything over 180 would be a good total here.

Out of the 34 games played here, the teams chasing a total have only won on 12 occasions. Hence, batting first would be a better option at the Harare Sports Club ground.

The T20 series will not be televised across any TV channel in India. However, cricket enthusiasts in India can stream the Bangladesh tour of Zimbabwe online, via the FanCode website or application. To unlock the Live streaming option, you will have to purchase a ₹39 Tour Pass which will allow you the stream all the matches in the tour Live.