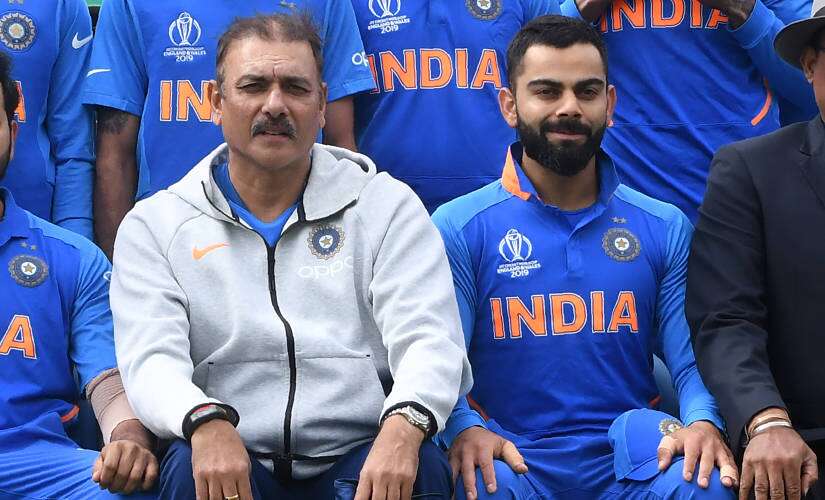 The BCCI has finally put an end to the mystery around the team’s new head-coach. Earlier today, the Kapil Dev-lead Cricket Advisory Committee (CAC) decided to re-appoint Ravi Shastri to the coveted position. While Shastri was a clear favorite for the job and had skipper Virat Kohli’s backing, the news certainly has divided many fans.

Shastri’s appointment, ahead of some more experienced candidates has been a really surprised a lot of fans. Many believe that the experience of an international candidate like Tom Moody or Mike Hesson would’ve groomed young players. There are people who speculate that, despite all claims, Virat Kohli had an unfair influence on the selection process. Some say that the foreign candidates were much lower on the priority list, which substantially hurt their chance. Interestingly, India won their last World Cup under the guidance of South African coach Garry Kirsten.

On the flip-side, there are people who believe Shastri has done as good a job as any coach could’ve done. Fans have reasoned that in the past few years, the team has produced the most consistent results across all formats. Not to mention, India won their maiden test series in Australia under Shastri’s guidance. Under his tenure, India have reached the semi-finals in every ICC tournament they have competed in. During various points under his time, the Indian team achieved the first rank in tests and ODIs. In the light of these facts, it would be unfair to assume India haven’t fared well under Shastri. The team has always made it to the climaxes; it is the final hurdles where they have stumbled. 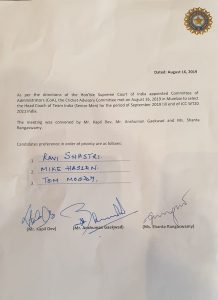 Apparently, the CAC didn’t make the final call on any priority list or list of achievements as such. Sources have discovered this letter issued by the CAC which displays a priority list for the candidates. The names of Hesson and Moody at numbers 2 and 3 almost certainly deteriorate the claims of an ‘Indian Priority’.

It appears that in his interview, Shastri was asked to explain India’s recent loss to New Zealand. In the recently concluded World Cup, New Zealand beat India by 18-runs to qualify for the finals. Chasing 240 to win, India lost their top three batsmen in the first ten overs and could never really recover from the shock. However, for a team whose top-order had been performing well consistently, the top-order collapse raised a few eyebrows.

Ravi Shastri was probed about this particular subject and the committee wanted to see how he would react to it. Reportedly, Shastri defended his team and claimed that one bad day did not reflect his team’s entire journey. He convinced the CAC that his team had a rare off-day and hopefully the team would learn from it and move ahead. He further added that his next focus was on winning the upcoming World T20I (2020 and 2021). Apparently, he impressed the CAC with his confidence and clarity of plans, which prompted them to retain him for his job.

Watch Video: Most Bizarre Run Out In The History Of Cricket, Have You Seen Before

According to various sources, Shatri and bowling coach Bharat Arun appear to be the only candidates who’ll be retaining their roles. Ex-domestic selector Vikram Rathour looks likely to replace batting coach Sanjay Bangar. While the post for the fielding coach appears to be a two-way competition between the incumbent R Sridhar and South African Jonty Rhodes. By next week, the remaining posts and their candidates should be confirmed.

How do you feel about Ravi Shastri’s re-appointment? Should the BCCI have tried a foreign candidate? Let us know what you think in the comments.