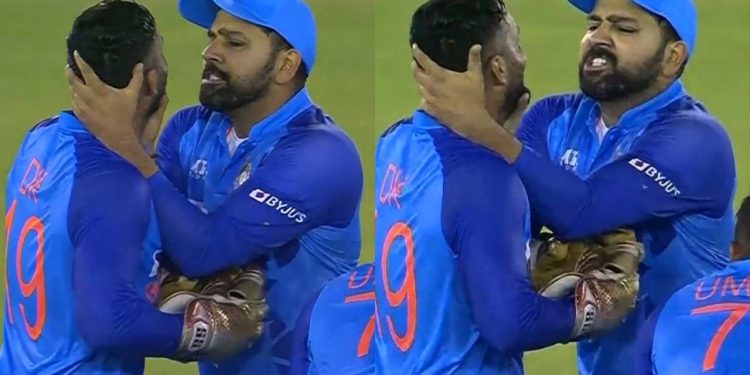 The countdown for the T20 World Cup has started and all the teams are trying their best to sort out their combination for the marquee event. India is one of the teams that is still looking for their best XI and they have got only 5 matches to figure out the combination. Ind vs Aus T20 series kickstarted on Tuesday with the first T20 and amongst all the good performances, the video of Rohit Sharma grabbing Dinesh Karthik’s neck has gone viral.

Team India is hosting Australia for a 3-match T20 series which got underway yesterday evening where team India was outplayed by the Aussies in style. The first Ind vs Aus T20 saw the Australian captain Aaron Finch winning the toss and he invited the Indian team to bat first. Though team India lost two early wickets, they gave their opponent a mammoth 208 run target. KL Rahul, Suryakumar Yadav and Hardik Pandya shined with the bat but all their efforts went in vain.

While team India did well with the bat, there is one moment of the first Ind vs Aus T20 involving Rohit Sharma and Dinesh Karthik which has gone viral on the internet. After going for plenty of runs, Umesh Yadav stormed back and took two wickets in his second over. The pacer got Steve Smith on the third ball of the 12th over while he showed Maxwell the way out on the last ball of the over.

Both the wickets came for India after the successful use of DRS review. When Karthik took the catch of Maxwell, he looked unsure whether to take the DRS or not. However, the skipper Rohit Sharma was absolutely sure that Maxwell had nicked the ball before it went into the gloves of Dinesh Karthik. It was during this time when Rohit Sharma grabbed the neck of Dinesh Karthik jokingly; the video of which has gone viral.

Team India lost the game owing to their poor bowling in the death overs. The same problem was also evident in team India’s Asia Cup campaign where they lost two Super 4 games against Pakistan and Sri Lanka which led to their ouster from the tournament. It is really important for the Indian team to figure out the issue and work on their death bowling if they want to have a great outing in the upcoming T20 World Cup.