Watch: Rohit Sharma gets angry as Dinesh Karthik and Yuzvendra Chahal forget to appeal for LBW

India missed an opportunity to get rid of dangerous looking Cameron Green as no player appealed for the LBW. 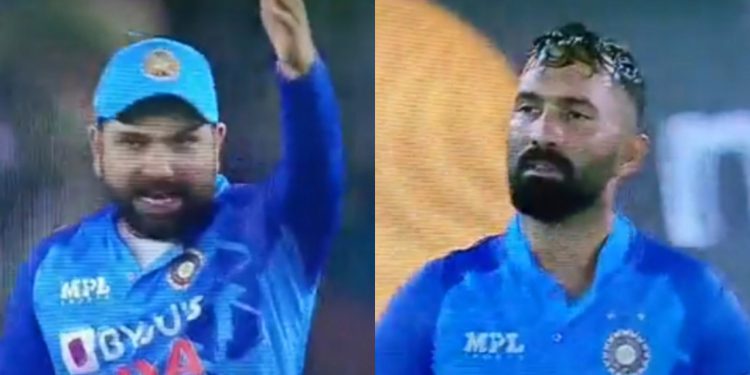 On Tuesday, India met Australia at Mohali in the opening match of the T20I series. Aaron Finch won the toss and invited hosts to bat first at the flat track. India didn’t get the expected start of the innings as two pillars of the line-up Rohit and Kohli departed cheaply. However, KL Rahul, Suryakumar Yadav, and Hardik Pandya’s explosive batting put India on the front foot.

The three batters showed fireworks in the middle overs and Hardik Pandya even finished the innings with 3 consecutive maximum. The all-rounder went on to be the top-scorer hitting an unbeaten 71 off mere 30 balls while KL Rahul and Surya scored 55 and 46 respectively. India put 208 runs on the board.

Australia too got most of the batting-friendly surface in the initial overs as they went past 100 in 10 overs. Cameron Green scored 61 off 30 balls, however, he would have departed in the 5th over of the innings if Yuzvendra Chahal and Dinesh Karthik had appealed for LBW.

It all happened in the 3rd ball of the 5th over when Green tried to sweep leggy’s delivery, however, missed and the ball hit on his pad. In the very next over, the reply of same delivery and ball-tracking showed it to be smashing into the leg-stump. Indian skipper Rohit Sharma who watched it on the big screen got pissed up. He was seen shouting at Dinesh Karthik and Yuzvendra Chahal who were responsible for the missed opportunity. Here’s a video of the incident.

India had to wait long for the 2nd wicket to fall. After surviving LBW, Green departed as Australia’s second wicket when the score was 109. A set Steve Smith too lost his wicket in the next over and it triggered the collapse of the Aussie batting line-up.