The crowd cheered for Shoaib Malik during the Indian vs Pakistan encounter. Here's how his wife, Sania Mirza, reacted to it. 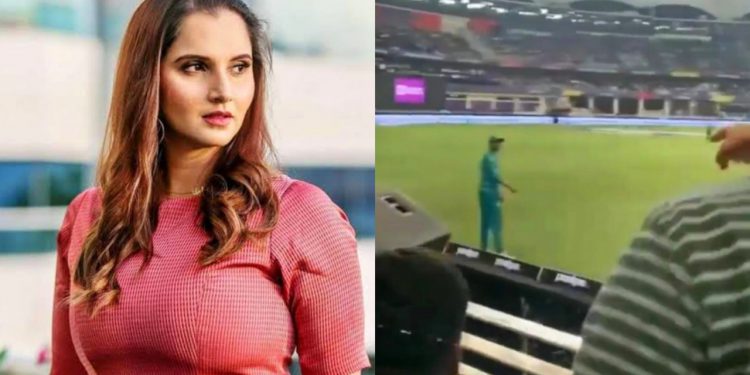 Veteran Pakistan Batsman Shoaib Malik is a part of the T20 World Cup squad of Pakistan. He featured in the match against India but didn’t get a chance to bat. However, he fielded for his side during India’s innings. While he was fielding near the boundary, some Indian fans started cheering for him. The video of the incident was shared by his wife on social media.

Shoaib Malik is married to Star Indian Tennis player Sania Mirza. The couple got married to each other back in 2010. As Sania Mirza belongs to India, the Indian supporters who were present in the stands during the India vs Pakistan encounter, started chanting ‘Jijaji Jijaji’ for Shoaib.

In the video, it can be seen that Shoaib Malik who is fielding near the boundary is getting some cheers from the stands. The crowd chants ‘jijaji jijaji for Shoiab and as soon as he glances back, the cheers get even louder.

Shoiab Malik, who is at the end stage of his career, was brought back into the side for the T20 World Cup due to his experience. In fact he is the most experienced player in the current Pakistan squad. His last international appearance came 14 months back, against England in September 2020. Due to the brilliant show by the Pakistan openers, in the game against India, Shoiab didn’t get a chance to bat but he might be seen batting against New Zealand in Pakistan’s next fixture.

Pakistan will be facing New Zealand on Tuesday. Malik has scored a total of 2335 runs at an average of 31.13 and a strike rate of 124.20 in 117 T20Is for Pakistan. The Pakistani supporters expect highly of him.