History was made on Sunday as Pakistan defeated India for the first time ever in a World Cup game. 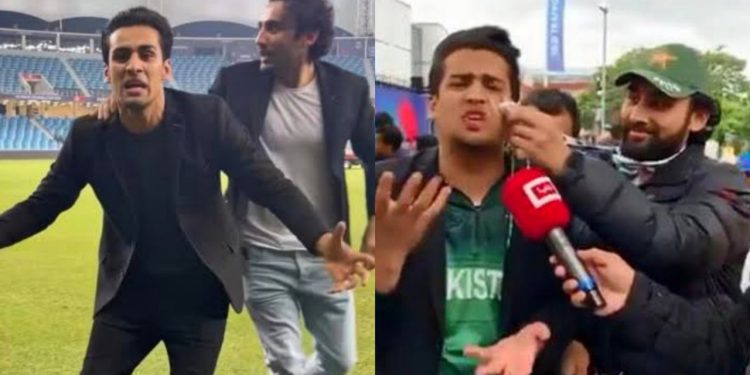 Pakistan outplayed India on Sunday and broke the 12-match long winning streak of the Indian team against Pakistan in the World Cups. Pakistan never had managed to defeat India in the T20 World Cup, as well as the 50-over World Cup. However, Babar’s side created history last night by defeating India by 10 wickets.

The Pakistan side made an impact right from the start and the Indians never completely had control over things. Leaving Kohli and Pant aside, no other Indian batsmen could get going. This led to India scoring just 151 runs. The Indian bowling was not up to the mark. Bumrah & Co. could not scalp a single wicket. Mohammad Rizwan and Babar Azam scored flawless fifties to take their team home.

The one-sided win of Pakistan over India gave the Pakistani fans a reason to celebrate. It is after years of disappointment that they have got a chance to see Pakistan defeating India in a World Cup. The famous Pakistan Cricket Fan, Momin Saqib as well could not control his emotions after Pakistan’s win.

Momin Saqib, a Pakistani Fan, whose video went viral after India’s 2019 World Cup win over Pakistan, was seen expressing his happiness after yesterday’s clash. Being overjoyed after Pakistan’s victory, Momin could not control his emotions. He entered the ground to venerate the soil of the UAE. He was thrilled by the fact that Pakistan had won by 10 wickets against India. “History has been made by the Pakistan Cricket Team,” he exclaimed. He further stated that the cheers of the Pakistani supporters will reverberate in the stadium for years to come.

Momin later went towards the Pakistan dressing room in order to congratulate the players. While talking to the Pakistan opener Mohammad Rizwan, he expressed his happiness. Momin said to the right-hander that he’s crying tears of happiness after the brilliant show by the team.

The road ahead for Team India

Team India came into the Super 12 stage after a brilliant show in the warm-up games. India defeated England & Australia in the warm-up matches but couldn’t carry forward the momentum. Having lost against Pakistan, the Indian team is already in a troublesome situation. Kohli’s men will need to win the remaining 4 matches in order to confirm their spot in the semis. Losing another game might cost them the chance of winning the World T20 title.

ALSO READ: Two changes India can make for their next T20 WC clash versus New Zealand

India will next face New Zealand on the 31st of October. And there’s an interesting fact that might be haunting most of the Indian fans – India have never defeated NZ in a T20 World Cup. The Indian supporters must hence be hoping for a change in fortunes.