The left-handed batsman was in his element as he scored a crucial century for his team. 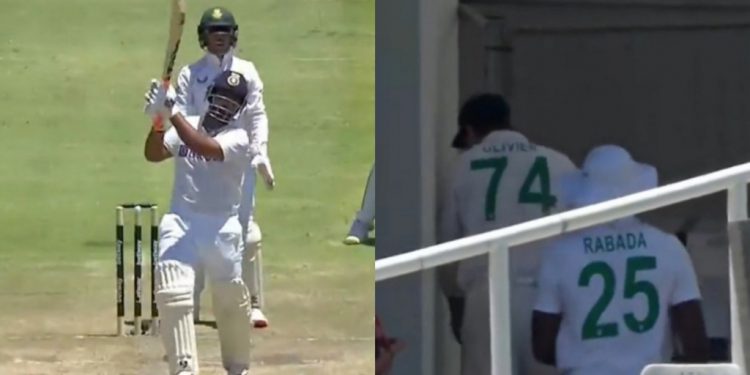 Rishabh Pant has become a well-known name in Indian cricket for his flamboyant style of batting. The southpaw has earned a reputation of putting the opposition bowlers under pressure while batting. The fans witnessed the same Rishabh Pant in the second inning of the IND vs SA 3rd Test. The Indian wicketkeeper thrashed the South Africa bowlers and made the Proteas fielders search the ball in stands with a huge six.

The 3rd Test match between India and South Africa has gone about at a rather brisk pace. The bowlers from both the sides displayed great discipline and proved to be too good for the batsmen from both the teams. However, the third day belonged to Rishabh Pant who scored a fluent century amidst the collapse of Indian batting yet again in the third Test.

The duo of Virat Kohli and Rishabh Pant steadied the ship for India after losing two quick wickets in Pujara and Rahane. Pant went after Keshav Maharaj after lunch and punished the bowler for two maximums. Pant hit a straight six and the ball disappeared in the stands making South Africa fielders Rabada and Jansen look for the ball which took some time.

The hosts started Day 3 on a positive note as they claimed wickets of Pujara and Rahane in the span of two overs. It was then Pant and Kohli who fought for their survival and took the team to a better position. Rishabh Pant looked in great touch as he played a sensible knock while also taking calculated risks at regular intervals.

The Indian wicketkeeper-batsman played a pivotal role in making sure that his team gets a competitive score in the second inning. While the wickets kept falling on the other end, Pant held one end together and ultimately reached a well-made century. Team India were all out for 195 and more than half the runs came from Pant’s bat.