Star India pacer rules himself out from T20I series vs England. 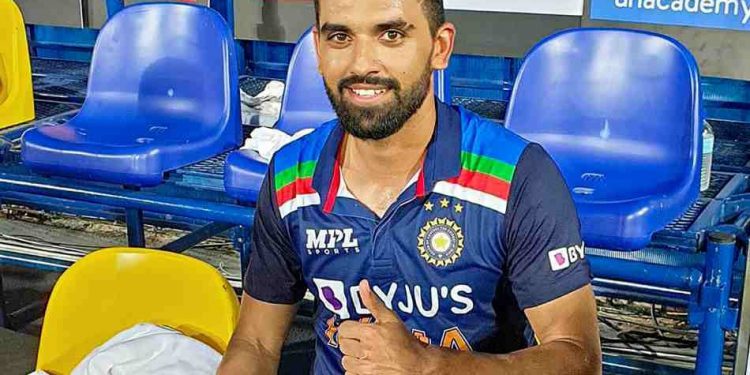 India pacer Deepak Chahar has been on a forced sabbatical from cricket ever since he sustained a hamstring injury in the T20I home series against the West Indies earlier this year. The injury kept him out of the Indian Premier League, where he was Chennai Super Kings’ costliest acquisition at INR 14 Crores.  And from the looks of it, Deepak is unlikely to make full recovery from his injury anytime soon.

Chahar has been injured since February

Chahar is currently undergoing rehabilitation alongside the likes of Washington Sundar and T Natarajan at the National Cricket Academy. And while his recovery process is going on track, it could take four or five more weeks before he gets match fit. What’s interesting about this is that Deepak- a centrally contracted team India player- came forward and gave some crystal clear details about his injury status.

“I am bowling four to five overs at one go as per my rehab programme right now. My recovery is going pretty well and I think it will take another four to five weeks for me to get match fit,” Chahar told PTI during a recent interview.

As per Deepak, the recovery process is gradual and step-by-step, which is why he will only assess his fitness once he plays some club cricket matches. But until then, he believes that he won’t be fit in time to feature in the 3-match T20I series against England that starts from July.

“It’s a step-by-step process as far as recovery is concerned. I don’t think I will be fit for England T20s. Once I am match fit, I will need to play some club-level games to check my fitness,” said Chahar.

When asked how confident he was of featuring in the LoI series against the West Indies that starts late in July, Deepak claimed he was unable to comment as of now. He did, however, assure his fans and followers that he will try to make full recovery by then. “I can’t say that but I will definitely try and get fit by then. Let’s see.”

ALSO READ: ‘He should have been in squad for Ireland T20s’ – Sunil Gavaskar disappointed as selectors ignored IPL Star

The Indian men’s team will be on the road for the next few months. They will start the international season by playing the fifth rescheduled test match against England from last year, following which there are Limited Overs tournaments scheduled in England and Ireland. Following this European tour, the team will travel to the Caribbean for a 3-ODI and 5-T20I series right before the WT20 in Australia.