IPL 2022: RCB inning comes to a halt as a Cat hangs out on sight screen 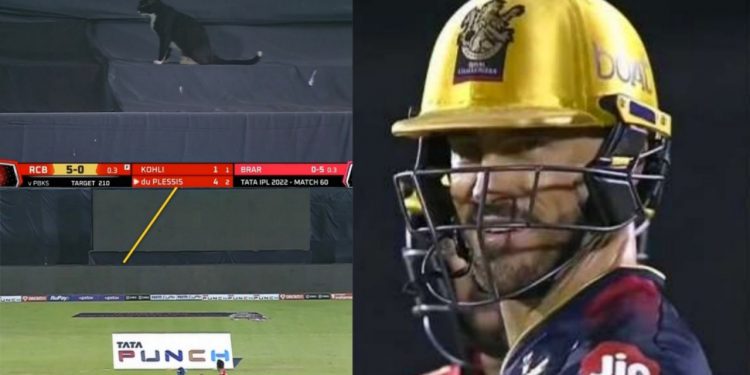 Cricket matches have often been interrupted due to unforeseen circumstances, and something similar happened on Friday night during Punjab and Bangalore’s group stage IPL match. Right at the start of RCB’s run-chase, a black cat was spotted sitting on top of the sightscreen, which caused a few minutes of delay in resuming the match.

RCB captain Faf du Plessis had just scored a boundary off the last ball and was looking in good touch when he gestured to the umpires to pause the game. The cat on the sightscreen was directly in the line of Faf’s eye while batting and posed a genuine distraction. The umpires and players had to wait for a solid few moments before the cat decided to move out of its own accord, and that’s when play could finally be resumed.

Fans on social media had a great time making jokes on the cat’s cameo appearance in the RCB-PBKS match. Several fans associated the cat and the date of the match (13 May, Friday) as an obvious omen to explain Virat Kohli’s dismal run of form. Some took the comedy a step further and blamed the black cat as the ultimate omen behind Bangalore and Punjab’s winless performances across all the 14 seasons they have featured in.

I think this black cat is the reason for the lack of form of @imVkohli it showed itself today. #RCBvsPBKS #PKBSvsRCB #IPL #ViratKohli @RCBTweets pic.twitter.com/OgG2MUa6Pr

Dear #Kohli , if you want to prevent evil eyes , either you stop posting workouts on twitter or else adopt a Black cat #IPL #IPL2022 #RCBvsPBKS #RCBvPBKS pic.twitter.com/x4innvWIlp

It’s Friday the 13th and a black cat stops an IPL game momentarily as it appears in front of the sidescreen!#RCBvPBKS #cat #TATAIPL2022

Ironically, it was the black cat that brought some of the vintage forms out of Kohli’s bat as he managed to score a few stylish boundaries. But in the longer run, none of the Bangalore batters really managed to get settled into 210 run chase. Kagiso Rabada picked up 3 key wickets, while Jonny Bairstow walked away as the man of the match after his quickfire innings of 66 of 29 balls. The win catapulted Punjab to the sixth spot on the points table, keeping alive their hopes of a playoff spot. Bangalore, however, will now be under severe pressure to win their last match by a strong margin.