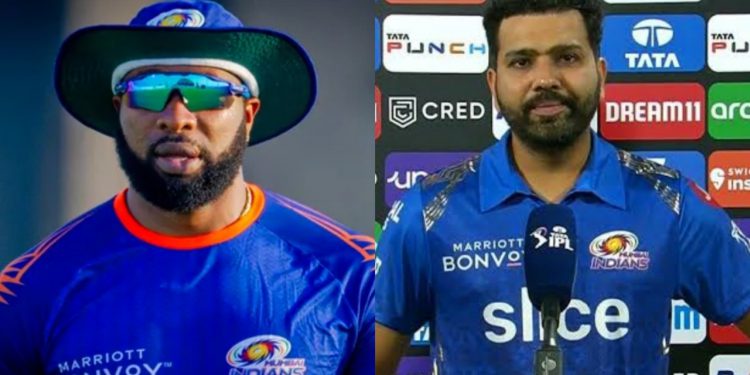 Five-time IPL champions Mumbai Indians are a team known for investing unwavering faith in their players through thick and thin. Despite the team having their worst season in a long time, Mumbai hasn’t resorted to making too many panic-induced changes and has more-or-less stuck with their core group of players.

But this template of perennial consistency took a major deviation during MI’s game on Thursday night against the Chennai Super Kings. Kieron Pollard- one of Mumbai’s retained players ahead of the 2022 season, who has been with the side for 13 years- was unceremoniously ‘rested’ against CSK.

Naturally, the decision caused many MI fans to raise eyebrows, who took to Twitter to hit out at the MI management and captain Rohit Sharma. From the looks of it, what disappointed Mumbai fans more than Pollard’s exclusion on his birthday- who happens to have a stellar record against the men-in-yellow- was the fact that MI made a change to their tried-and-tested success template.

the last time when Kieron Pollard faced CSK on his birthday.. pic.twitter.com/Sy3igD0a9t

“Pollard was ready to be dropped”- Rohit Sharma

But as it turned out, the MI management and Rohit had a lot less to do with Pollard sitting out against Chennai than Pollard himself. According to Rohit, Pollard was mentally prepared to get the axe.

“He (Pollard) was the one who came up to us and he was ready for it (get dropped),” Rohit said at the toss. “He’s been a stalwart for Mumbai, he came out and said that he’s okay with that,” Rohit added later at the post-match conference.

Talking about the IPL’s El-Classico game, Chennai were derailed early on in the innings courtesy of a brilliant opening spell from Daniel Sams. Captain Dhoni stuck around till the end, but CSK could only manage to score 97.

Mumbai did lose some wickets to the fiery pace of Mukesh Choudhary early in the innings but they managed to register a comfortable victory in the end. The result officially knocks Chennai out of the IPL playoffs qualification race.

Also Read: DRS goes unavailable in IPL match due to power cut at Stadium; Devon Conway walks back despite being not-out