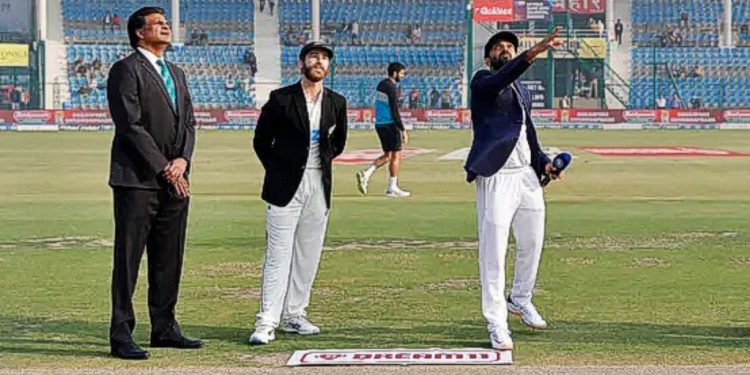 From November 17 and after, India was scheduled to host New Zealand for a homes series consisting of 3 T20Is followed by two test-matches.

Today’s date marks the beginning of the first test of the couple. This game marks the return of int’l cricket to Green Park Stadium which is situated in Kanpur. The coin-toss was held in the morning. Rahane called it right and decided to have a bat first. Earlier, Rohit had won each of the three T20 int’l tosses.

Black Caps all-rounder James Neesham, better known as Jimmy Neesham is a jester of sorts. Often times, Jimmy’s witty tweets and opinions make netizens sit back and soak-in the fun. Neesham has tonnes of admirers in the indian subcontinent.

However, he may lose some or gain some after what he recently tweeted. When Indian captain Ajinkya Rahane won the toss and decided to bat first, Neesham’s witty side was at display again. Neesh questioned the authenticity of India’s recent coin-toss wins. Here’s what his tweet went like: “Can someone please take a closer look at those coins please? #INDVSNZ”

Can somebody take a closer look at those coins please? 🙄 #INDvNZ

Toss wins are a game of luck. Regardless, Neesham doesn’t buy that indian skippers can ever win consecutive tosses in a row. They are not that lucky. Are they? Take T20 World Cup 2021 as an example. How many tosses did skipper Kohli win? Apparently, two out of five. Forty-percent success rate.

However, ever since Indian Cricket Team has returned home to host NZ for a five match long series their toss-win rate has shot up to hundred percent. They’ve won four out of four. So, Jimmy being the funny person that he is chose to fire shots at the toss organizers in India. He tried blaming them for being partial and letting India win the toss intentionally.

Nonetheless, it is all fun and frolic from Jimmy Neesham. Therefore, it has to be clarified that his recent tweet was pure sarcasm and nothing else. It is all for a good laugh.