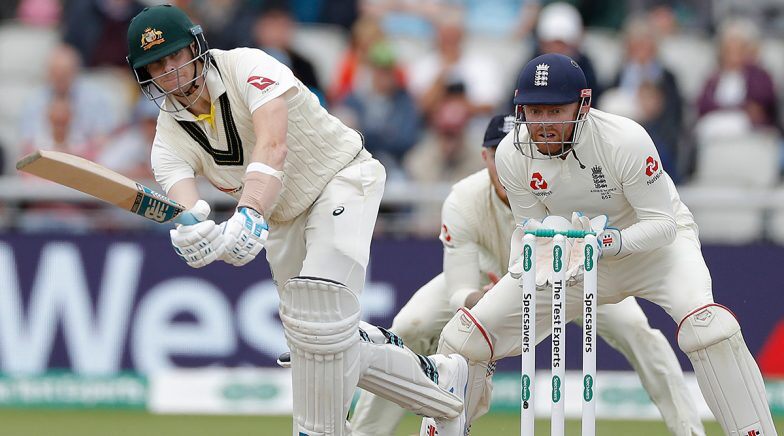 England wicket-keeper and batsman Jonny Bairstow tricked the former Australian skipper Steven Smith on the fourth day of the fifth and final Ashes Test at Kennington Oval on Saturday.

The incident happened during the 66th over of England’s second innings while Nathan Lyon was bowling his second ball of the over to Jonny Bairstow. The Sunrisers Hyderabad batsman intended to play a sweep shot against the off-breaker but he changed his plan at the very last minute opened his bat and squeezed it towards the third-man.

Watch the Video Below

The shot completely puzzled Steven Smith who was standing at first-slip as he was about to move to leg side when he saw Jonny Bairstow attempting a sweep but was shocked as the ball passed through his arms where he was unable to stop the ball. Bairstow picked a couple of runs from that shot.

It was not the first time that Bairstow had fooled Smith in this match. On the second day of the match when Smith alongside Matthew Wade took three runs, as Smith was about to finish his third run Bairstow showed signs of ball coming at his end. Smith got trapped into his trick and dived in to save himself and when he got up he smiled seeing the ball going at Jofra Archer’s end.

Smith has had an excellent series with 774 runs from seven innings at an average of 64.56, he has played a one-man show for Australia and his been their wall in this series. Despite Smith’s triumph England are likely to level the series 2-2 after they win the fifth Ashes at Oval.