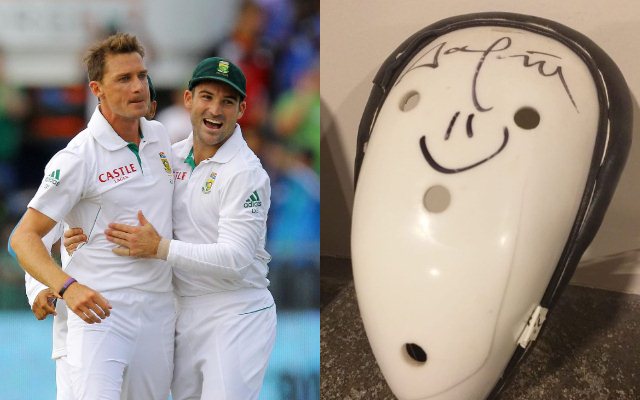 The 36-year-old will continue to play in the white-ball cricket as confirmed by Cricket South Africa in another tweet. Steyn played his last test match against Sri Lanka at Port Elizabeth earlier this year in February. In the two matches, he picked 6 wickets.

Steyn has amassed 439 wickets at an average of 22.95 from 93 matches he played in the white jersey.

Kane Williamson one of the masters in strokes and well known for his defensive technique recalls an incident which was a very painful moment for the Kiwi skipper.

During 2013 New Zealand had visited South Africa to play for an entire month. In one of the test match, Williamson was blown by Dale Steyn’s ferocious delivery that hit him on the former’s abdomen guard.

After the delivery, Steyn refused to apologise and went on to bowl the next one. Kane Williamson did not hesitate to post the abdomen guard’s picture on his Instagram account which also had the autograph of Steyn.

Here is what Kane Williamson posted

The Sunrisers skipper captioned the picture saying “The box @dalesteyncracked back in 2013 – OUCH! Kind of him to sign it after the match though 😂 Congratulations on an incredible Test career mate #steyn#alwayswearabox”

The box @dalesteyn cracked back in 2013 – OUCH! Kind of him to sign it after the match though 😂 Congratulations on an incredible Test career mate #steyn #alwayswearabox

Steyn also could not control his laugh and commented “😂 Brilliant! Cheers bud 🤙🏼 @kane_s_w.”

Steyn is a kind of bowler, who can swing the leather at sheer pace. He has ruffled a number of batsmen in his 15-year career and still will continue to do in white-ball cricket.

Williamson and Steyn have played against each other in five Tests, 10 ODIs and in a single T20I. Steyn has dismissed Williamson thrice in test cricket.