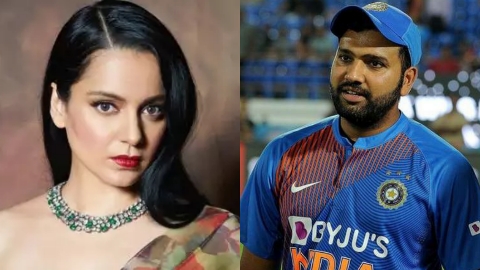 Bollywood actress Kangana Ranaut keeps making headlines for her Tweets. Earlier, she gets involved in a Twitter war with Punjabi singer Diljit Dosanjh which created controversy. The 33-year old is against the ongoing farmers’ protest and criticizing every celebrity who is supporting the protest. The actress involves in a fresh Twitter war as American singer Rihanna supported farmers’ protest. As it became a worldwide topic, many Indian cricketers’ and other celebrities tweeted to defend the government. However, Kangana made a distasteful tweet on Rohit Sharma as the cricketer made a remark on the ongoing protest. Later, Twitter deleted this tweet of Kangana Ranaut.

Rohit Sharma had written a message on his Twitter handle, “India has always been stronger when we all stand together and finding a solution is the need of the hour. Our farmers play an important role in our nation’s well-being and I am sure everyone will play their roles to find a solution TOGETHER. #IndiaTogether.”

The actress felt that there was no clarity in the batsman’s remark. Kangana Ranaut was quick to reply to the 33-year old and compared cricketers with washerman’s dog. She tweeted “Why are all cricketers sound like Dhobi ka kutta na ghar ka na ghat ka? Why would farmers be against such laws which are for their good. These are the terrorists who are creating a ruckus, tell me that you are so scared?” The tweet of Kangana gets deleted by the microblogging site as it was in bad taste. However, the screenshot is getting viral on the internet. Also, she gets a warning from Twitter for not following community guidelines. However, the actress slams Twitter as she feels she had not violated any rule.

“China puppet twitter is threatening to suspend my account even though I did not violate any rules, remember jis din main jaungi tumko saath lekar jaungi, just like Chinese tik tok you will be banned as well” wrote Kangana Ranaut after Twitter deleted her tweet on Rohit Sharma.