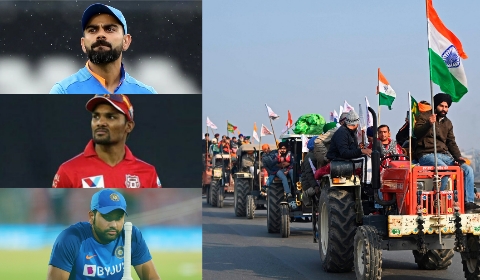 Farmers’ protest in India over new bills is now getting worldwide attention. On Tuesday, international pop star Rihanna lends support to the ongoing protest in New Delhi. She tweeted a CNN article headlined ‘India cuts internet around New Delhi as protesting farmers clash with police’. Her caption reads, “Why aren’t we talking about this?! #FarmersProtest”. Following the singer’s reaction, many global personalities joined her and criticized the Indian government. It led to the Twitter war among Indian celebrities many of which defend the government’s action. Cricketers including  Virat Kohli and Sachin Tendulkar also tweet on farmers protest.

Captain of the Indian cricket team Virat Kohli consoled citizens as he said there will be a peaceful agreement between all the parties soon. The 32-year old tweeted, “Let us all stay united in this hour of disagreements. Farmers are an integral part of our country and I’m sure an amicable solution will be found between all parties to bring about peace and move forward together.”

Sachin said that Indians know about India and foreigners should not talk about Indians’ matters. The former Indian batsman tweeted “India’s sovereignty cannot be compromised. External forces can be spectators but not participants. Indians know India and should decide for India. Let’s remain united as a nation.”

Former Indian cricketer Pragyan Ojha is not impressed with Rihanna’s tweet on Farmers protest. The cricketer advised the singer not to interfere in India’s matters. The former leg spinner replied to Barbados born singer,  “My country is proud of our farmers and knows how important they are, I trust it will be addressed soon. We don’t need an outsider poking her nose in our internal matters!”

Most of the Indian cricketers criticizing Rihanna’s tweet on farmers protest. However, Sunrisers Hyderabad bowler Sandeep Sharma supported the singer as she faced criticism. “By this logic no one should care about each other because every situation is someone’s internal affair.” Sandeep tweeted.

Cricketers including Suresh Raina, Rohit Sharma, Ajinkya Rahane also tweet on farmers protest. CSK vice-captain Raina tweeted, “We as a country have issues to resolve today and will have issues to resolve tomorrow as well, but that doesn’t mean we create a divide or get perturbed by external forces. Everything can be resolved through amicable and unbiased dialogue.”

Rohit Shama the vice-captain of limited-overs format wrote on his handle. “India has always been stronger when we all stand together and finding a solution is the need of the hour. Our farmers play an important role in our nation’s well being and I am sure everyone will play their roles to find a solution TOGETHER,”

Vice-captain on test team Rahane wants everyone to stay united. He tweeted, “There’s no issue that cannot be resolved if we stand together as one. Let’s remain united and work towards resolving our internal issues #IndiaTogether” Ravi Shastri and Anil Kumble also shared messages and want the country to stay together. On the other hand former England, spinner Monty Panesar wants to take Rihanna’s interview on the farmers’ issues.

Farmers have been protesting on the different borders of the national capital since November 26 last year against the three newly enacted contentious farm laws. The laws, however, have been put on hold by the Supreme Court.