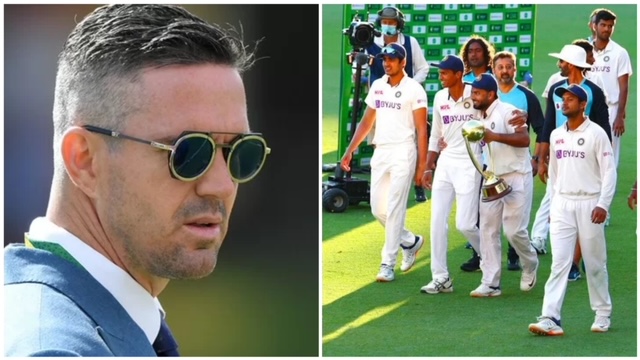 On Tuesday, the Indian team registered a historic win over Australia in the final test match at the Gabba, Brisbane. With winning the final test match, India won the second consecutive test series in Australia against Australia. This is a big defeat for Australia in Australia, as India wins the series with 2-1 even after some of the big Indian players were not playing because of the injury and unavailability. However, despite this, English former cricketer Kevin Pietersen warns Team India ahead of their next series against England in India.

Team India will be going to take on England in 4 matches test series, 5 matches T20I and 3 matches ODIs series, starting with a test match at MA Chidambaram Stadium in Chennai from 5th February 2020. England former Cricketer Kevin Pietersen grab the opportunity and decided to warn team India and their fans in a light manner. In order to bring a twist in the warning, he chooses to write a message in Hindi on his Twitter handle.

Also Read: Tim Paine get trolled by Ravichandran Ashwin for his “See you at Gabba” banter

English translation of his tweet, “India – celebrate this victory because it has come while you were fighting against all the difficulties. However, the real team (referring to England) will be coming to your home in a few weeks, whom you have to defeat. Beware, make sure you don’t celebrate this victory too much for the next two weeks.”

England tour of India is starting from 5 Feb 2020 with the first test match at M A Chidambaram Stadium in Chennai followed by the second test match at the same venue. Sardar Patel Stadium in Ahmedabad will host the third and fourth test match of the upcoming series between India and England. Thereafter both teams have to play 5 matches T20I series and then 3 matches ODIs series.