‘Mere pe dekh, maa ch***ne gaya wo’ – Hardik Pandya gets angry on Indian fielder for not listning to him

The all-rounder wasn't pleased with a fielder after his first over of the match. 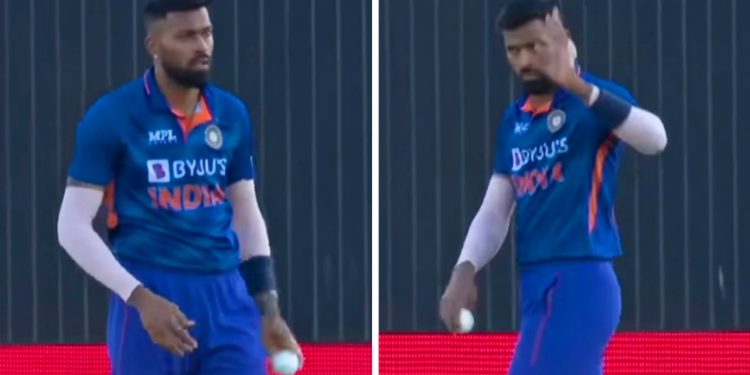 Hardik Pandya’s all-round performance earned him the man of the match award in the 1st T20 against England. The all-rounder picked career-best 4 wickets and was also handy with the bat as he scored 51. However, he didn’t have the same day in the 2nd T20. First, he could manage to score only 12 runs off 15 balls and then went for 8 runs in his very first over.

Pandya wasn’t pleased after his very first over. The all-rounder caught on stump mic getting angry with one of his teammates. He was even heard saying Hindi cuss words on air. It seemed, the 28-year-old cricketer wasn’t happy as the fielder didn’t move where he told him to move.

Pandya was heard yelling, ‘Mere time mere pe dekh, maa ch***ne gaya wo kya bol raha hai’. Which translates to English; ‘Look at me when I am bowling, don’t care what he speaks’. However, it is not known that on which player he yelled at.

India posted 170 on the board after being invited to bat by the home side. Ravindra Jadeja turned out to be the savior as his knock of 46 runs gave support to tumbling Indian innings. Later on, Bhuvneshwar Kumar sending Jason Roy back on the very first ball and edging Jos Buttler to Pant in the next over completely put England on the backfoot. Bumrah did rest by casting dangerous-looking I am Livingstone with a peach.

ALSO READ – 7 Series, 7 Captains: Who is the leading contender to be Rohit Sharma’s successor?

England couldn’t overcome after facing three blows under powerplay. Their innings tumbled and the hosts were restricted at only 121. The big positive for England from the match was Richard Gleeson picking 3 big wickets on his debut. Although, the Jos Buttler-led side has lost the series and now will play at Nottingham to avoid a whitewash.