Ishan Kishan had to sacrifice his wicket after a terrible mix-up with Virat Kohli. 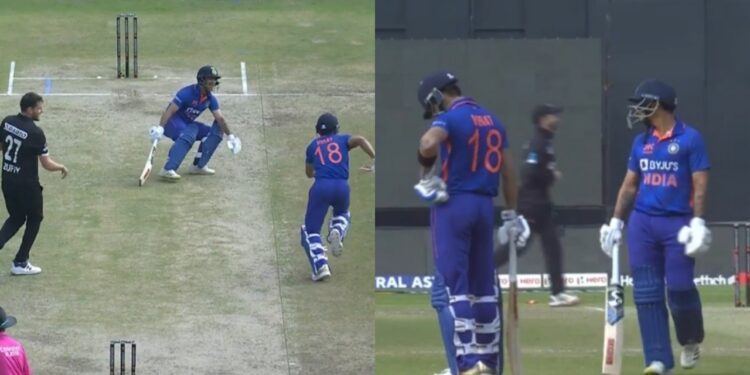 Team India defeated New Zealand in the third ODI at the Holkar Cricket Stadium in Indore as most of the things went in the favor of Men in Blue apart from a terrible mix-up.

Virat Kohli and Ishan Kishan were involved in the mix-up as both the batters found themselves on the same side of the pitch and the latter had to sacrifice his wicket.

The Indian team openers gave them a great start as both Rohit Sharma and Shubman Gill went on to score a hundred as they didn’t spare any of the Kiwis bowlers. However, Team India did lose a bit of momentum as they lost a few wickets in quick succession.

In the 35th over of Team India’s innings, Virat Kohli and Ishan Kishan got involved in a terrible mix-up. Kishan tapped the third delivery of the over bowled by Jacob Duffy towards the cover region and looked for a quick single.

Virat Kohli who was quite hesitant initially did fully commit himself for the single and sprinted towards the other end without looking towards his partner. On the other hand, Ishan Kishan had a look towards the fielder as he changed his mind and thought of going back into his crease.

However, the wicketkeeper batter was too late to change the decision as Virat Kohli was already home and Kishan had to sacrifice his wicket for the senior partner. As he was going back towards the pavilion he had a verbal exchange with Virat Kohli.

Virat Kohli got backlash from most of social media users after he almost forced Ishan to sacrifice his wicket. Netizens labeled him as ‘Selfish’ as he was equally responsible for the mix-up.

Kohli is a proper selfish player ,never sacrifices a run out

Virat kohli Was praying for Rohit Sharma's wicket and then this run out of ishan kishan .

Eventually, the mix-up didn’t cost much to the Indian team as they managed to post a mammoth total of 385-9 on the board as Hardik Pandya gave them some momentum towards the end overs. New Zealand fell short by a huge margin of 90 runs despite a great knock of 138 by Devon Conway as the Indian team clinched the series by 3-0.