Sunrisers Eastern Cape got a great start as their openers Jordan Hermann and Adam Rossington gave them a blistering start as both of the openers got their fifties. 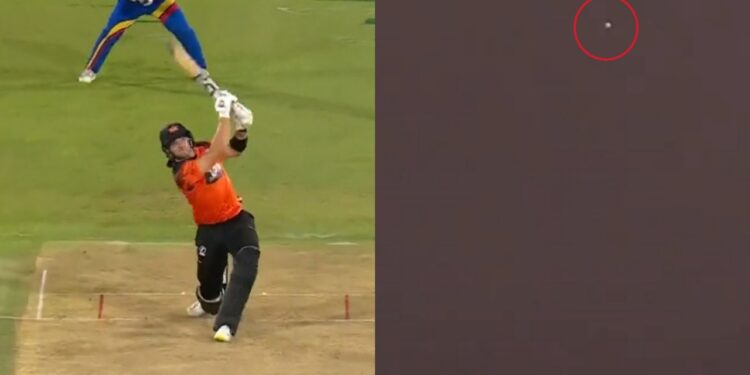 Sunrisers Eastern Cape defeated Durban Super Giants by a huge margin of 124 runs in the 19th match of the ongoing South Africa 20 (SA20) league after posting a mammoth total of 210-2.

Sunrisers’ batter Tristan Stubbs played a handy knock of 27 off just 13 deliveries and smashed a monstrous six straight down the ground.

Sunrisers Eastern Cape got a great start as their openers Jordan Hermann and Adam Rossington gave them a blistering start as both of the openers got their fifties. Skipper Aiden Markram too played a crucial knock which helped them to put on a total of 210 runs.

Tristan Stubbs came in to bat at number 4 and chipped in with a quick-fire knock of 27 runs while playing just 13 deliveries. In the 19th over of the Sunrisers’ innings, Stubbs took on Super Giants’ pacer Wiaan Mulder and smashed a gigantic six on the second delivery of his over.

Wiaan Mulder bowled an outside-off delivery right in the slot which allowed Stubbs to extend his arms as he lofted it towards the long-on region. Stubbs made such a clean strike that the ball landed outside the stadium. The onlookers, including the commentators, were stunned by the Stubbs’ gigantic hit.

One of the commentators was heard saying,“Tristan Stubbs sends this one into orbit. What a shot!! It’s out of the ground. Forget about that one.”

Tristan Stubbs’ scintillating knock included a four and a couple of boundaries with a phenomenal strike rate of 207.69. The Sunrisers batters didn’t spare any bowler and eventually posted a match-winning total of 210-2.

In response to Sunrisers’ massive total, Durban Super Giants failed by a huge margin as they crumpled for a mere 86 runs and fell short by 124 runs. Sunrisers Eastern Cape’s spinner Roelof van der Merwe was adjudged the Player of the Match for his brilliant bowling which didn’t allow any Super Giants’ batter to settle on the field. He scalped six wickets for the Eastern Cape while giving away just 20 runs and allowing them a comfortable victory.