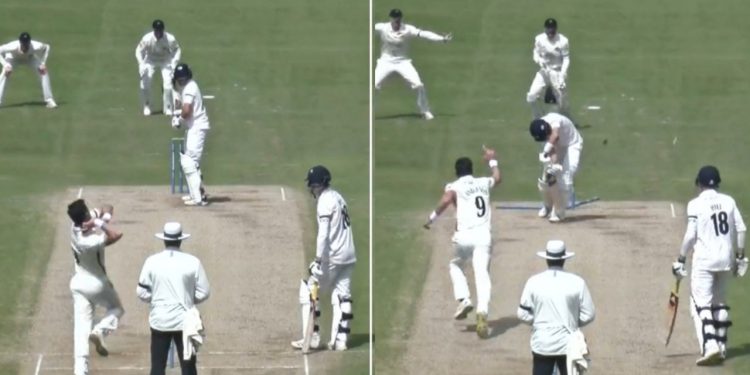 England fast-bowling legend James Anderson is known as the ‘Sultan of Swing’ for a good reason. Even at 39 years of age, Jimmy continues to remain a lethal wicket-taking option thanks to the unnatural amount of swing that he is able to generate upfront.

While he might not (yet) be in the England test team’s scheme of things anymore, his wicket-taking prowess hasn’t taken even the slightest semblance of a dip. In fact, Jimmy and his spectacular spell of swing bowling was on full display in the English County Championship tournament recently.

Playing for Lancashire against a Yorkshire side featuring the likes of Joe Root, Dawid Malan, and Harry Brook among several others, the Sultan managed to pick up 3 crucial scalps to help his team secure a draw. But it was his dismissal of Root- the former England test skipper- that got fans of swing bowling all-over the world excited.

Root, having faced just 9 balls in the second innings, was looking to settle into the crease and compliment his first innings score of 147 with another big knock. But Anderson made sure none of that was possible, as he castled Root’s defences with a length delivery that swung back beautifully. There wasn’t much that Root could do other than sighing in despair, especially against such a vintage reverse-swinging delivery of Anderson’s hand.

Anderson’s former partner in crime, Stuart Broad, was left ogling over the magical delivery on Twitter. He made no hesitation in channeling out his inner Jimmy Anderson fanboy in praising the reverse swing. Here’s what he wrote on Twitter: