Pakistan actress tries to troll India after defeat vs Australia; gets self-trolled as PAK lost to England 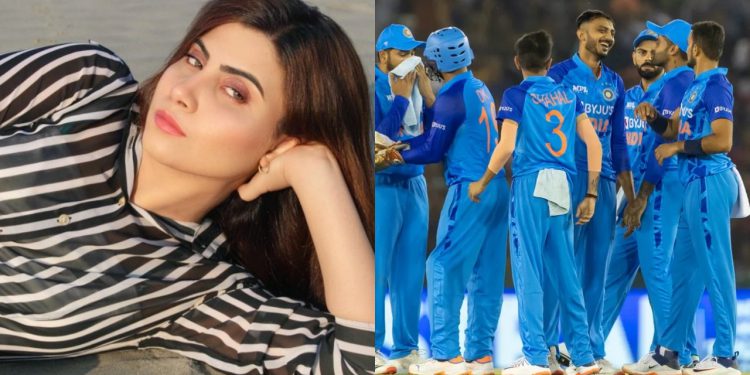 Team India started their 3-match T20I home series against Australia on Tuesday evening where the Kangaroos dominated the Indian team with their amazing batting display. In a high-scoring game where the bat did the most of the talking, the Australian team overshadowed the Indian team. After the Indian team lost the match, a Pakistan actress tried to take a dig at the team on Twitter but she got trolled by the fans in return.

Pakistan actress gets self-trolled after she trolls India

Team India scored a huge 208 runs after they were invited to bat first by Aaron Finch & Co. Hardik Pandya was the pick of the batsmen as the allrounder notched-up his career best T20I score. The right-handed batsman scored 71 runs off just 30 balls and gave his team the kind of finish they needed. He posted a few pictures on Twitter where he can be seen along with other teammates and a Pakistan actress tried to troll the team.

Hardik Pandya has made a great comeback after his injury and has proved to be a vital cog in the current Indian team. His ability with the bat was on display against Australia and though the team lost the match, he was the standout performer for his team. He shared some glimpses of the match on Twitter as he posted some pictures with the caption, “We’ll learn. We’ll improve. A big thanks to all our fans for your support, always.”

After the allrounder posted the pictures on Twitter, Pakistan actress Sehar Shinwari tried to troll the batsman and the India team as she wrote, “Please lose next match to Pakistan on 23rd October you will learn more from it,” followed by a laughing emoji. This irked the Indian fans and they replied to the actress with savage comments and reminded her that her own team lost to England in their 1st T20I.

Talking as if your team win against England, 🤡

Hello #Pakija🇵🇰 medam your team already learn AsiaCup final 2022 &T20 world Cup final .You stop, it's natural in the game, even for them, you learn and stop hating us.Your eyes are full of hatred.👁️👁️ remember Never compare with India🇮🇳💪💪

Have some shame you lost to england at home 😂

Team India will now play their second game against Australia on 23rd October in Vidarbha Cricket Association Stadium, Nagpur. It will be a knock-out game for India as they will lose the series if they face defeat in the second game as well. Team India really need to work on their death bowling in order to trump the mighty Australian team.

Tags: India vs AustraliaIndia vs PakistanPakistan vs England