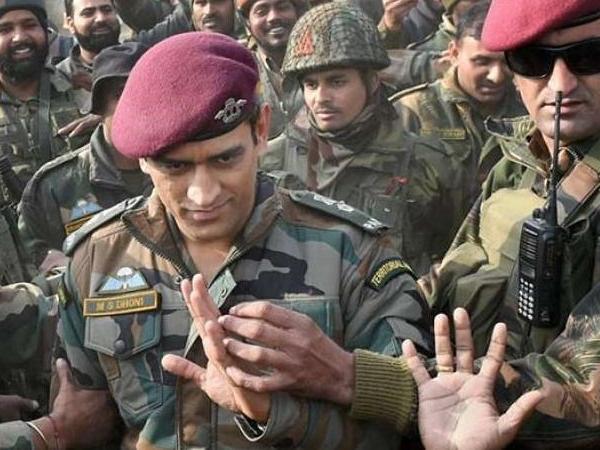 Former Indian captain MS Dhoni is currently on national duty with the Defence force as he is serving the duration of two months with the Territorial Army in Kashmir. The 38-year-old, who is an honorary Lieutenant Colonel, he is with the 106 TA Batallion (Para) of the Indian Army in Kashmir.

Dhoni has a big fan following across the world, he looks selfless when it comes to serving his nation. He made himself unavailable for the West Indies tour as he wanted to serve his paramilitary regiment for a couple of months.

With Kashmir being on heat after the Indian government abolished Article 370 – which granted special status to Jammu and Kashmir – Dhoni witnessed a hostile reception during his visits to Baramulla. It is not confirmed that news is confirmed or is it a rumour?

Recently a video featured on social media shows Dhoni was received with the chants of ‘boom boom Afridi’ with some aggressive intention.

Former Pakistan skipper Shahid Afridi has always raised his voice when it comes to Kashmir. Recently, after the government scrapped Article 370, Afridi took to twitter to claim that there was “unprovoked aggression” and “crimes” in Kashmir. He requested the UN to intervene in the burning issue and asked Trump to mediate on the matter.

Kashmiris must be given their due rights as per #UN resolution. The rights of Freedom like all of us. Why was @UN created & why is it sleeping? The unprovoked aggression & crimes being committed in Kashmir against #Humanity must be noted. The @POTUS must play his role to mediate

On Tuesday, Gautam Gambhir replied to Afridi, with whom he has had on-field and twitter spats on twitter by stating “will sort it oust son.”

@SAfridiOfficial is spot on guys. There is “unprovoked aggression”, there r “crimes against humanity”. He shud be lauded 👏for bringing this up. Only thing is he forgot to mention that all this is happening in “Pakistan Occupied Kashmir”. Don’t worry, will sort it out son!!!

MS Dhoni is expected to be in the Valley till August 15th. There has been speculation about the wicket-keeper’s retirement after India’s exit in the World Cup semi-final against New Zealand.

However, reports indicate that he may be recalled for the forthcoming home series against South Africa in September after the conclusion of the ongoing tour of West Indies.

India will play three T20Is against the Proteas from September 15 onwards, before locking horns in as many numbers of Tests.