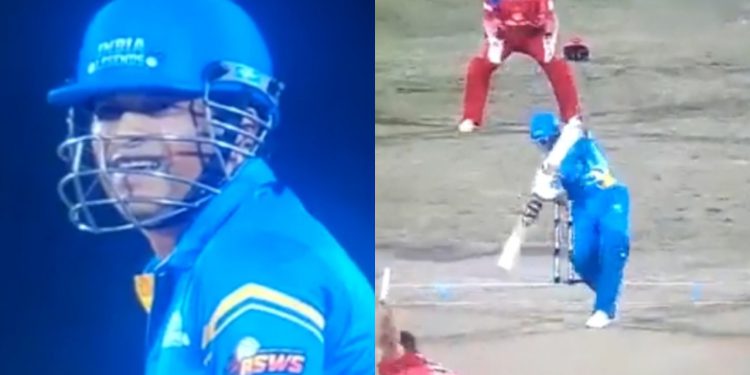 The 2022 edition of the Road Safety World Series T20 kickstarted on 10th September with the clash between India Legends and South Africa Legends. The fans have been thoroughly entertained seeing their star ex-cricketers on the field again. The Master Blaster has looked in good touch in the ongoing tournament and Sachin Tendulkar’s fiery inning vs England Legends on Thursday took the fans on a nostalgic ride.

The skipper for England Legends, Ian Bell opted to bowl first after winning the toss and invited the India Legends to set the target. India Legends got off to a flying start and the credit for the same goes to Sachin Tendulkar’s fiery inning where he thrashed the England Legends bowlers. Tendulkar played a captain’s knock for his team and set the tone of the inning for the batsmen to come.

Sachin Tendulkar’s fiery inning of 40 runs off just 20 deliveries had the fans both enthralled and nostalgic at the same time. The Master Blaster’s short yet impactful inning was laced with 3 fours and 3 maximums which ensured that the India Legends make full use of the powerplay. Owing to the inning played by Sachin Tendulkar, team India scored runs at the run rate of over 10.

Let Virat Kohli bat at No.3. Because if you require a back-up opener for T20 World Cup, there’s one batting in Dehradun right now

God of Cricket for a Reason😎 #SachinTendulkar pic.twitter.com/m0peYLEu8B

The fans were in awe of Sachin Tendulkar’s fiery inning and it reminded them of the vintage Sachin Tendulkar. Some fans even went on to say that the legend should be picked for the upcoming T20 World Cup. The netizens went berserk after the blistering knock by the legendary batsman and they shared their happiness and excitement on the internet.

Talking about the tournament, Sachin Tendulkar is captaining India Legends and his team has won both the matches they have played. It is to note that two of their matches were washed out due to rain. The India Legends are on top of the points table currently with 12 points and will play their next fixture against Bangladesh Legends on 25th September.