PSG vs Al Nassr 2023 Friendly Match Date and Time in India: Messi and Ronaldo set for one last dance 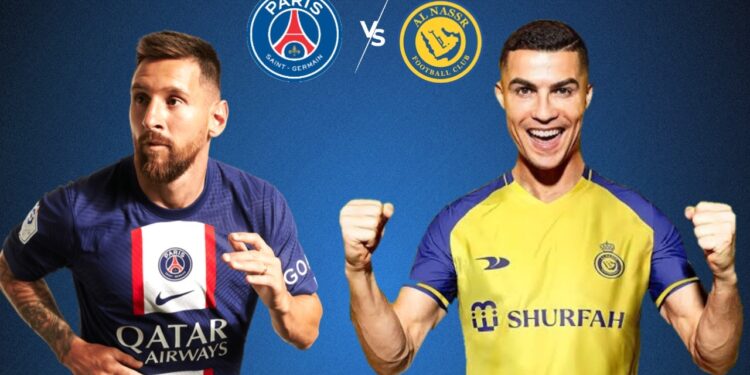 The rivalry between Lionel Messi and Cristiano Ronaldo is known to be one of the greatest sports rivalries. The rivalry was at its peak when they were playing La Liga and used to clash in El Classico games. However, since Cristiano Ronaldo left Real Madrid and shifted to Juventus the rivalry seemed to be faded away. After that, both played together only once when Juventus met Barcelona in a Champions League game. But now both are expected to meet in PSG vs Al Nassr friendly match at Riyadh and the date and time are set.

As the FIFA World Cup concluded, Lionel Messi joined PSG ahead of their French Cup game. On the other hand, Cristiano Ronaldo received a grand welcome in Riyadh as he joined his Saudi Arabian club Al Nassr. As per reports, the Portuguese Star may miss the game against Al Tai FC on January 5 due to disciplinary action taken against him by FA. However, he will be available when PSG will arrive in Riyadh to play against Al Nassr players.

PSG is gearing up for a friendly match vs a combined XI of Al Nassr and Al Hilal football clubs. According to reports, the match will take place on January 19 and the start time of the game is 8:00 PM in Saudi Arabia. So, the game in India will commence at 10:30 PM. Al Hilal + Al Nassr vs PSG match is a part of Riyadh Season Cup 2023.

The squads have not been announced yet but Messi and Ronaldo’s one last meeting is certainly on cards. Fans were expecting both to meet in the FIFA World Cup 2022 Final. However, Portugal’s quarter-final defeat against Morocco shattered their dreams.

If both superstars from Argentina and Portugal play the PSG vs Al Nassr friendly match then it will mark their 37th meeting. So far, Ronaldo and Messi have played 36th football games against each other, out of which the Argentine won 16 times while CR7 ended up on the winning side 11 times.