Jadeja goes down memory lane and gives a cheeky reply to Anderson's comments on his recent batting performance. 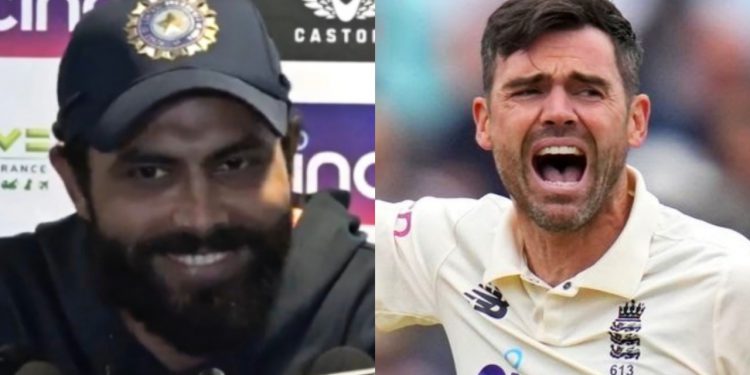 Indian all-rounder Ravindra Jadeja who is in decent form with the bat for the past few years has yet again proved his mettle, against England at Edgbaston. On the second day of the Edgbaston test match, Jadeja went on to score the 3rd test century of his career, impressing everyone with his caliber to bat in a place like England. After the end of the day’s play, during the press conference, England bowler James Anderson went on to speak about Jadeja’s batting. Later, when the journalists informed Jadeja about what Anderson had said, the Indian all-rounder took a sly dig at the England bowler.

Jadeja has been one of the most consistent performers for the Indian test side in the recent past. The all-rounder has given numerous stunning performances with the bat over the past few years and his improved batting has added to the strength of the Indian batting line-up. In the 35 tests which he has played since 2017, he has managed to score 1652 runs at an average of 45.89 including 3 centuries and 13 fifties.

Jadeja also came to the rescue when team India was in trouble during the first innings of the ongoing test match. Half of the Indian side was packed under a score of 100 by the English bowlers. However, Rishabh Pant and Ravindra Jadeja then put up an outstanding partnership of 222 runs in just 239 balls and turned the match in the favour of India.

Jadeja comes up with a reply to Anderson’s comments

James Anderson, on being asked to comment on the change in Ravindra Jadeja’s batting, said he doesn’t feel there’s any dramatic change in Jadeja’s batting. Anderson said that the only thing that has changed is that Jadeja now bats at number 7, plays as a proper batsman, and leaves the ball well. Anderson however accepted that Jadeja has troubled the England bowlers with the way he batted.

“In the past he was coming at 8, bat with the tail so he had to chance his arm a little bit. Whereas now at 7 he can bat like a proper batter. He leaves really well and made it difficult for us,” said Anderson.

Later on, when Jadeja came to address the media, a journalist informed him what Anderson thinks about his batting. Jadeja then came up with a cheeky reply taking a dig at Anderson. Jadeja said he’s happy about the fact that Anderson sees him as a proper batsman now, after the incident that happened back in 2014.

ALSO READ: MS Dhoni arrives in England; Here’s the reason behind it

It bears mentioning that Jadeja and Anderson grabbed headlines for the wrong reasons back in 2014. Both the players were involved in an ugly spat that involved a physical incident in the corridor leading to the changing rooms. Anderson allegedly had pushed Jadeja in the back. Eventually, a Level 3 charge was imposed on Anderson by ICC whereas Jadeja was fined 50% of his match fee.