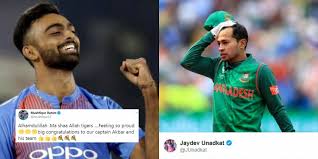 Cricket-fraternity all across the globe poured-in with messages, congratulating the Bangladesh team for their sensational 3-wicket victory over India at the final-match of under-19 World Cup yesterday at Potchefstroom. The iconic win marked the Bengali-speaking nation’s first successful attempt at winning an ICC tournament, across any format. Captain Akbar Ali gave a solid-display of his  calm nerves, and comfortably polished off the chase with a Man-of-the-Match worthy performance.

In-fact, more than the team, fans have taken a liking to Ali and his composed demeanor both on-and-off the field. The young, Bangladesh captain walked into the match whilst suppressing a number of his personal issues. Just a few weeks back, Ali had to bear the trauma of losing his elder-sister to a pregnancy miscarriage. The news of his beloved sister, Khadija Khatun’s demise, reached him two-days late; his family didn’t want him to lose his focus. Incredibly, the 18-year old came up with a stunning display of grit. Ali put all his psychological agony behind him, and retained his firm-grip over the reins of his young-side in the following knock-out matches against South-Africa, New Zealand and ultimately India. Yesterday’s final-match perfectly concluded his tournament, where, after a string of disappointing scores, his batting-exuberance finally came to the fore with his match-winning knock.

Besides his temperament and talent; fans have also admired the Rangpur-based lad for his etiquettes and courteousness. Ali openly criticized his side for misbehaving after the conclusion of the match. Amidst the euphoria of the celebrations, some Bangladesh players got carried away and started shoving and pushing their opposing teammates. Akbar took responsibility for his teammates actions, and issued an apology for the untoward incident. This mature-gesture impressed fans all across the globe, who further appreciated the Bangladesh captain.

Amidst the said admirers of Ali, was India fast-bowler Jaydev Unadkat. Congratulating the Bangladesh team on Twitter, Unadkat went an extra step and praised Ali for his composure during the match. In the process, however, the Rajasthan Royals’ pacer took a subtle dig at the Bangladesh men’s senior team’s former captain, Mushfiqur Rahim. For the sake of fun; let’s not spoil things- see if you can figure out the left-arm pacer’s sly reference.

Well done Bangladesh for winning the U-19 World Cup! Read about how they worked to build this team since the last 2 years.. good for their future and for the game in whole! Also loved how their captain did not celebrate before actually winning the match.. learning from seniors 😉

Guessed it? For the uninitiated, Unadkat is hinting towards the nail-biting India-Bangladesh group-stage clash of the 2016-World T20 at Bangalore. That particular match had ended in a thriller-finish with hosts India narrowly winning the match by just 1-run. In his tweet, Unadkat looks back at wicket-keeper Rahim’s passionate celebrations after hitting two successive boundaries in the final over. The pre-mature celebrations didn’t go down well with several Indian fans, who criticized Rahim for attempting to ‘humor’ the India team. Ironically, it was team India who had the final laugh, as the Tigers soon endured a last-moment batting collapse, and with 2-runs required off the last-ball, India captain MS Dhoni dived behind the stumps to inflict a superb run-out, fetching the hosts a hard-fought 1-run victory.

Besides Unadkat, several other cricketers lauded the Bangladesh boys for the win. Here are some of the other tweets:

The most impressive part of Bangladesh win over India in junior World Cup? They did it with a better pace attack!! Bangla cricket reminds me of Indian cricket’s pre 83 age of innocence, driven forward by pure enthusiasm ! Well played tiger cubs! And well played Jaiswal! #U19WC

Congratulations to Bangladesh! A country that loves its cricket and its cricketers passionately. This is well deserved and great for the game.#ICCU19WorldCup

Well done Bangladesh on winning the under 19 World Cup, it looked like a team that meant business from the very first ball. #Under19WorldCup #Bangladesh