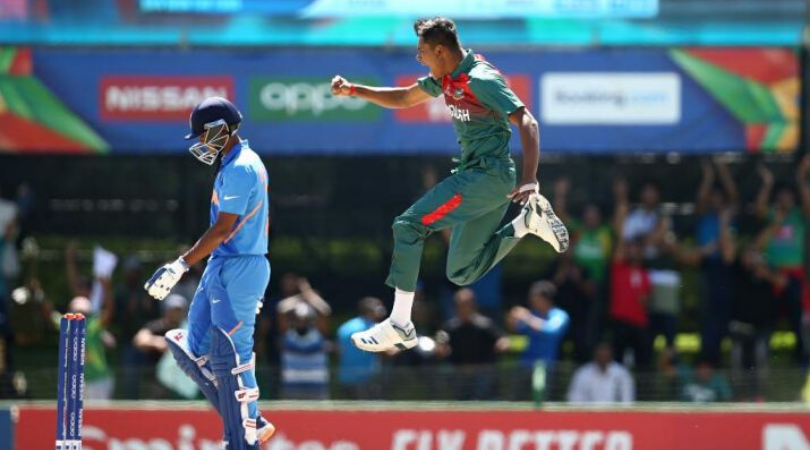 Yesterday, the India and Bangladesh boys competed in a blockbuster final match at Potchefstroom to conclude, what has undoubtedly been, an iconic Under-19 World Cup. The low-scoring affair went right down to the wire, especially with bowlers from both sides dominating the scorecards. The Indian colts had cruised off to a strong-start, resurrecting the scoreboard with a solid 94-run second-wicket partnership. It wasn’t long though, before Bangladesh countered, with a sharp and aggressive on-field display. Within a span of deliveries, the Tigers’ pace-troika stifled down the Indian scoring rate. Courtesy of the opposition’s clinical bowling and fielding improvements, the Indian-side were restricted to a paltry total of 177/ 10.

In pursuit of the target, and, more importantly, the coveted under-19 silverware, the men-in-red-and-green started-off the chase well, losing a solitary wicket in the power-play. Things took a steep turn, however, when India captain Priyam Garg decided to introduce leggie Ravi Bishnoi into the attack. The Jodhpur based wrist-spinner continued on his impressive form throughout the tournament, and triggered a Bangladeshi batting order collapse. His sublime spell of 10-3-30-4 near about succeeded in saving the day for the men-in-blue. But on the other-side, captain Akbar Ali and his partner Rakibul Hasan held on to their nerves. The duo played with caution, and stitched an impressive 8th wicket-partnership of 27-runs, which propelled the Bengali-speaking test-nation to their maiden ICC title.

Perhaps even ‘celebrations-galore’ would be an under-statement. Right after Rakibul hit the winning-run, the Bangladesh players charged down the field and reacted ecstatically to their hard-earned victory. The players all grouped together; embracing, laughing-savoring the accolade altogether. However, amidst the passionate celebrations, one of their teammates got somewhat distracted and had an exchange of words with an India player.

The situation deteriorated almost immediately, with players from both the sides beginning to shove and push each-other. Thankfully, the umpires intervened just in time and stopped the commotion from getting any further. Here’s a video former South-Africa cricketer JP Duminy posted, showing the incident in real time.

Amazing scenes here in Potchefstroom as Bangladesh pull off a miraculous victory and are the u/19 world champions.. well fought india.. standard of cricket today and throughout this tournament has been world class.. congrats Bangladesh #U19WorldCup #FutureStars pic.twitter.com/JD7re0KLo2

Shameful end to a wonderful game of cricket. #U19CWCFinal pic.twitter.com/b9fQcmpqbJ

Later in the press-conferences, India captain Priyam Garg spoke about the the matter and labelled the reaction ‘dirty’. “It happens, games like these are high on emotions. But honestly, it was a dirty reaction; and shouldn’t have happened.” His Bangladesh counterpart Akbar Ali concurred with his opinion, and even apologized for the indiscipline. “I’m not sure what exactly happened, but players need to maintain a discipline in such situations. It shouldn’t have happened, and I am indeed, sorry on the behalf of my team”.

As per reports, match-referee, Greame Labrooy will provide a more-detailed update later today, which would also include guidelines for any action that the ICC would decide to take against the players. Putting this incident aside, the players shared several other tense moments among themselves. Opener Divyaansh Saxena, for example, had a heated exchange with pacer Tanzim Shakib when the latter’s throw almost hit him on the head. Later, pacer Shoriful Islam gave Yashasvi Jaiswal a send-off after his dismissal.