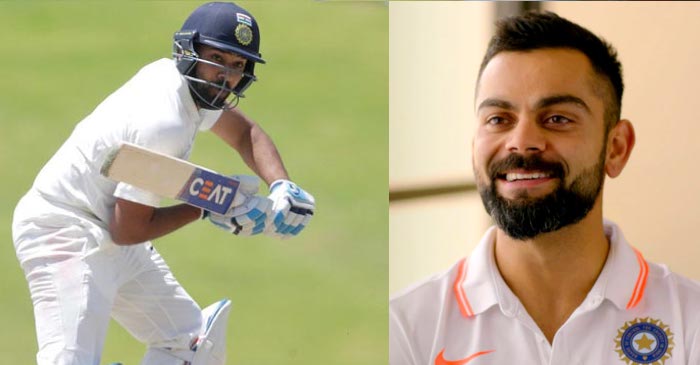 After World Cup 2019, rumours about a rift in team India started spreading. There were talks that the team is divided into two groups, Virat Kohli leads one group while the other one supports Rohit Sharma. Even there were rumours that Rohit Sharma wants the captaincy.

Even some experts and former players backed Rohit and gave advise of crowned him as the captain in shorter formats. However, players and team staff have denied the reports of rumours. On rumours, Virat Kohli said that if there was rift then the team would not have performed in the World Cup the way they did.

Scenes during the first test against South Africa are clearly telling that there is everything fine between in the dressing room. Rohit Sharma makes an outstanding comeback in the test side. The experiment of giving the opening to Rohit turned out to be successful as he went on to score 176 off 244 balls in the first innings.

The way Rohit was welcomed in the dressing room after this innings tells that everything is fine between him and Kohli. Indian skipper showed a special gesture as he kept the glass door open to receive and congratulate him for the special knock. Virat patted Rohit on the back as he entered the dressing room.

In the ongoing test, India is holding a strong position. Rohit’s 176 and Mayank Agarwal’s 215 took India’s total to 502. Both put a record-breaking partnership  317 runs. This is the highest opening partnership for India in a test match against South Africa. However, after this partnership wickets kept falling. At the end, India declared at the score of 502 losing 7 wickets.

South Africa didn’t have a good start of their innings. R Ashwin netted Aiden Markram with a peach a delivery. Soon, de Bruyn and Dane Piedt fell cheaply at the score of 4 and 0 respectively. Currently, the Proteas team is at 39 per 3. Opener Dean Elgar (27) and Temba Bavuma (2) will start the 3rd day for them.