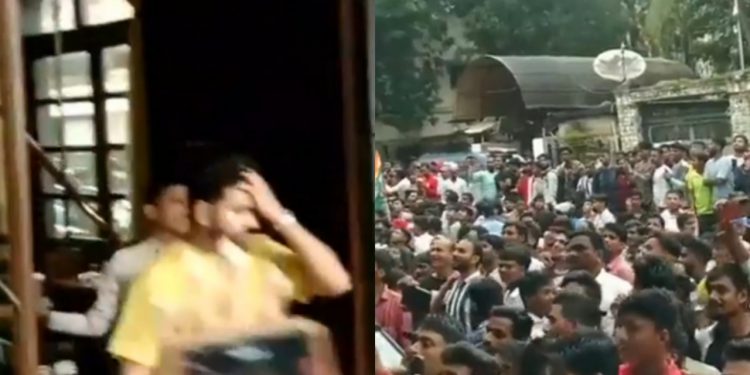 Cricket is one sport that has an unparalleled fan following in India and interestingly no sport even comes close to cricket in terms of popularity in the country. The cricketers enjoy unequalled fame in India, but sometimes that fame turns out to be the biggest barrier in their social life. One instance of it was seen recently when the Indian skipper Rohit Sharma got stuck in a Mumbai restaurant after fans mobbed the place to get a glimpse of the cricketer.

Rohit Sharma got stuck in a restaurant

It is a big challenge for cricketers like Rohit Sharma to go anywhere freely because of the fan base they have. More often than not, the fans spot the cricketers and try their best to see them live and even take a picture with them. However, Rohit Sharma got stuck in the restaurant because the crowd was too overwhelming and had blocked the exit of the place.

Fans went out of control by seeing their hero Rohit Sharma in Mumbai. pic.twitter.com/iH8ro78utC

Apparently, the cricketer had gone to meet his friend in the restaurant but as he was making his way out, he saw the sea of fans in front of him. On his way out, Rohit Sharma got stuck which led him to move back into the restaurant and wait for the crowd to disperse. The cricketer waited for the fans to clear the way, only then did the Indian skipper go out.

Also Read: 3 Franchises who can go for Ravindra Jadeja after being released by CSK

Rohit Sharma is one of the most popular Indian cricketers and is the current full-time captain of the Indian team in all three formats. He has been really good in his tenure so far and shares a great repo with the head coach Rahul Dravid. The cricketer is on rest at the moment and will only be seen in action as the Asia Cup begins on 27th August. Team India will play their first group stage match against the arch-rival Pakistan on 28th August.