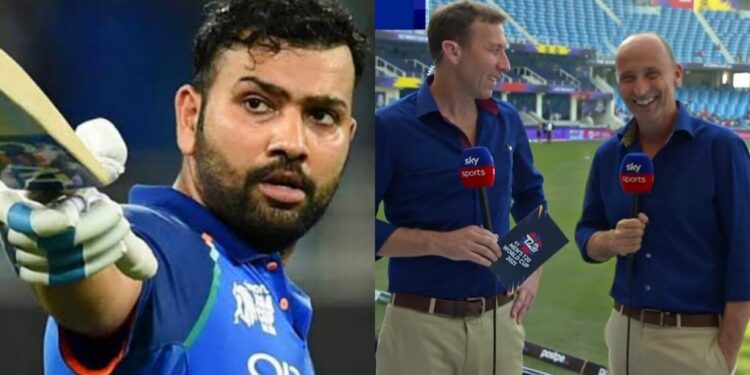 Indian Team’s T20 WC 2022 debacle has fallen on the shoulders of captain Rohit Sharma and his deputy KL Rahul after the duo failed to bat with intent throughout the campaign.

Not long ago, former England skippers Michael Atherton and Nasser Hussain clashed while discussing the origin of their tentative approach.

Hussain believed it is the lack of a fearless and decisive leader (like Eoin Morgan) that caused India to get in shell more often than they would have liked, and the appointment of a new skipper who’d let them loose should solve the issue.

Michael accuses Rohit Sharma and KL of playing for their places; Hussain defends the Indian openers

Michael Atherton, who led the English test team in 54 matches, differed in opinion and claimed that Rohit and KL feared losing their places in the international side due to higher competition for spots compared to England under Eoin Morgan.

“Talk about the Morgan impact on England and rightly so. But don’t you think it is harder in India for 2 reasons, one is the number of cricketers they have. So, obviously the competition is greater? You kind of feel, if you lose your place and somebody comes in, you might not get your spot back again.”

He also added how TV commercials in India offer the players in the international side large sums of money that they’d lose on getting axed from the squad.

Blasting Michael Atherton for his claims during the discussion on SkySports, Nasser Hussain reminded him that Indian Captain Rohit Sharma and his deputy KL Rahul are no ordinary players and their places will remain intact regardless.

“I think you’re complicating things. I’d be worried if they weren’t incredibly talented cricketers. (But) You’re not talking about someone who is on the edge of the seat for a place in the side. You are talking about Rohit Sharma– who has got 3 double hundreds in ODI cricket, 4 T20I centuries. So the guy can smash it. You are talking about KL Rahul, when you do see him bat (is a class apart).”

Both KL Rahul and Rohit Sharma have been rested for the ongoing limited-overs series against NZ; Hardik Pandya and Shikhar Dhawan respectively being declared the Indian team’s captain for T20I and ODI matches.