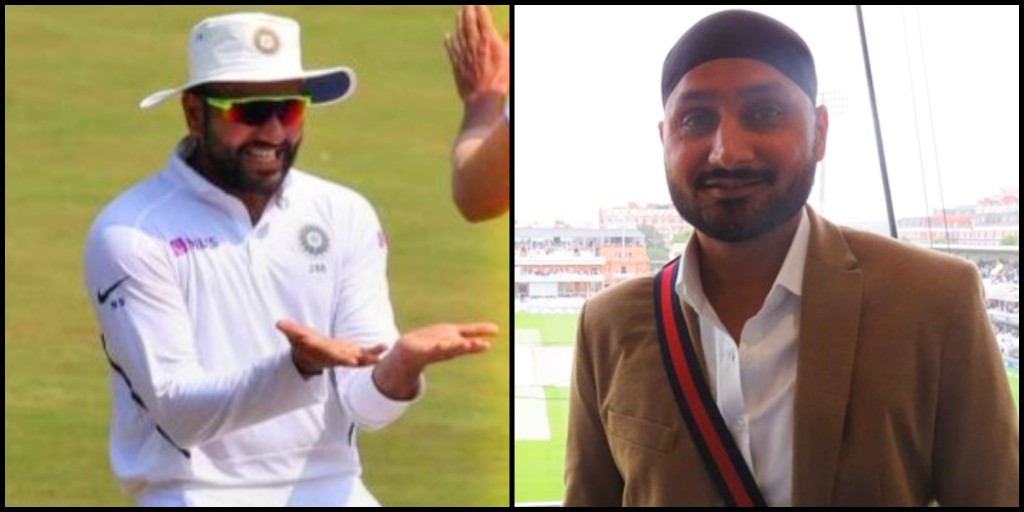 3rd day of the first test match was balanced for both India and South Africa. Meanwhile, Dean Elgar and Quinton de Kock got their hundreds. However, India is still in a better position in the match as visitors are currently trailing by 117 runs. At the stumps of day 3, South Africa is at 385 after the loss of 8 wickets. Although, Indian bowlers struggled really hard to break the partnership of Elgar and de Kock. But, Rohit Sharma was in fun mood during the innings.

After the tea, Rohit Sharma was heard on the stump mic trying to communicate with Harbhajan Singh. Bhajji was commentating for Hindi broadcast. Rohit recorded on stump mic saying, “Come in come in Bhajju paa come in. Bhajju paa aapke liye kaafi rough bann chukka hai, idhar aa jaiye thoda ball daaliye (A lot of rough has been created on the pitch, come and bowl for us)”

Sounds like Rohit Sharma on stump mic talking to Harbhajan Singh ? This after Ashwin picked up his 5th wicket. Listen to the audio #INDvsSA pic.twitter.com/muC5gp3i8B

Sounds like @ImRo45 is trying to communicate with @harbhajan_singh via the stump mic. #INDvsSA pic.twitter.com/tMSArHJ9iK

This happened just after R Ashwin completed his fifer. Ashwin took the advantage of rough on the pitch in last overs of the day. His figures are the 3rd day were; 5 wickets for 128 runs. South African spinners will be happy seeing rough patches on the pitch. They may create trouble for Indian batsmen in the 2nd innings.

However, this test has been a memorable one for both the Indian openers Rohit Sharma and Mayank Agarwal. It was Rohit’s first innings as an opener in test and he scored a brilliant 176. This innings has weighed in to settle his place as an opener. On the other hand, Agarwal smashed his maiden double century in is his 5th test match. He too has an opportunity of serving as an opener in test cricket for a long time.