The Indian skipper faced a blow on his thumb as he closed his hands early. 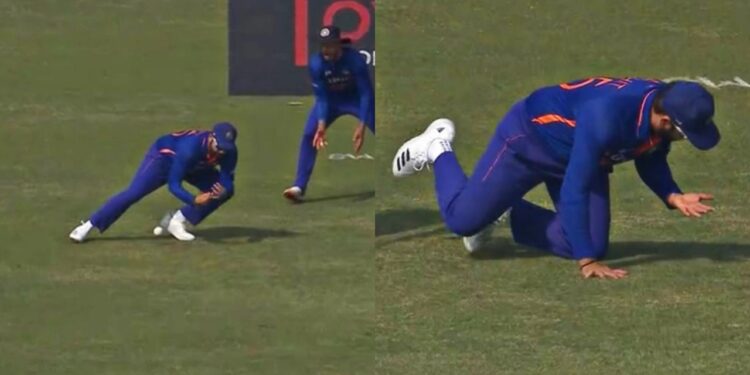 Team India’s captain Rohit Sharma was fielding at second slip in the second over of Bangladesh Innings which was bowled by Mohammed Siraj. The young pacer bowled a short of good length delivery outside the off stump to Bangladesh opener Anamul Haque who half-heartedly hung his bat and edged the ball.

The ball flew low towards India’s skipper Rohit Sharma as the Indian captain couldn’t hang onto it despite going with both hands and let Anamul Haque survive. The ball hit Rohit’s thumb as it suffered a mighty blow and it started bleeding straight away. Rohit walked off the field immediately for treatment and was sent for scans soon after.

“India Captain Rohit Sharma suffered a blow to his thumb while fielding in the 2nd ODI. The BCCI Medical Team assessed him. He has now gone for scans,” said BCCI in a statement.

Update: India Captain Rohit Sharma suffered a blow to his thumb while fielding in the 2nd ODI. The BCCI Medical Team assessed him. He has now gone for scans. pic.twitter.com/LHysrbDiKw

India’s vice-captain KL Rahul room over leadership responsibilities as Rohit Sharma walked off the field and Rajat Patidar came in as the substitute fielder. Even though Team India missed out on an opportunity to get rid of Anamul Haque, he was sent back the very next ball as Mohammed Siraj bowled a sharp delivery that jagged back onto Haque’s pads.

It will be interesting to see if Rohit Sharma will come back to bat while KL Rahul is leading the team during Bangladesh’s innings and the team is using Rahul Tripathi and Rajat Patidar as substitute fielders.

Bangladesh looked in a spot of bother against India’s rattling pace attack. Deepak Chahar and Mohammad Siraj started off really well and were equally backed by Shardul Thakur and Umran Malik. Both Siraj and Umran bowled some aggressive line and lengths and put the Bangladesh batters under some serious pressure and then Washington Sundar chipped away with three quick wickets including that of Shakib Al Hasan.