After bowling a maiden, Umran Malik strikes on the very first delivery of his 2nd over. 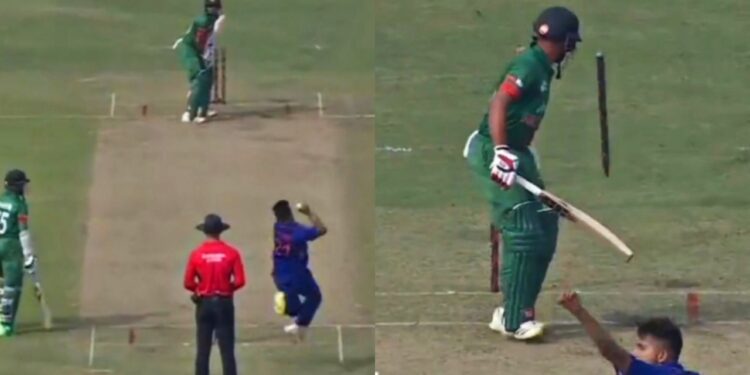 India’s speed sensation Umran Malik is hogging the limelight since his IPL debut. The Srinagar-born pacer earned his maiden India call-up in June this year all thanks to his brilliant performance in IPL 2022. The T20I debut of Umran was not up to the mark as he went expensive against Ireland and England games. However, he has impressed everyone in ODIs so far.

Malik made his 50-over debut for India in the series vs New Zealand and today against Bangladesh, he is playing 4th one-day game of his career. Shakib Al Hasan looked clueless as he faced the Indian speedster. The first over was a maiden and during the over a nasty bouncer even struck Shakib’s helmet. luckily, he survived an injury.

But as Umran came back to bowl his second over, Najmul Hasan Shanto was on strike and psychological pressure was certainly on him. The 23-year-old pacer bowled a wicket-to-wicket delivery with 151 KMPH speed and Shanto’s feet didn’t move at all. All we saw after was his off-stump going for a walk. Here’s the video of the wicket.

After the wicket, Bangladesh’s batting line-up tumbled like a house of cards. When this article was posted, the Liton Das-led side had lost 6 wickets on 80 runs. Sundar and Siraj had taken 3 and 2 wickets respectively while, Umran Malik’s figures read; 5 overs, 2 maidens, 8 runs and 1 wicket.

However, India were on the field today without their skipper Rohit Sharma as he suffered a blow on his thumb when trying to take a catch. He was then taken to Hospital for scans. An official update on Rohit’s condition is currently awaited. Meanwhile, KL Rahul worked as a standby skipper in Rohit’s absence.