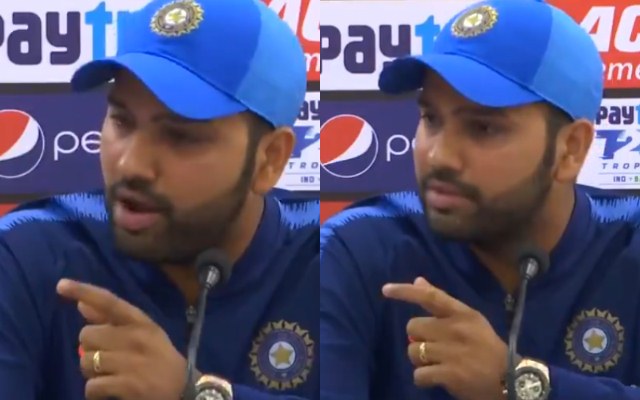 Rohit Sharma has got another opportunity of leading the Indian side. After the 2019 World Cup Rohit Sharma was set to lead team India in the absence of Virat Kohli. But at the final moment, Virat Kohli had decided not to take rest. Reports were that this move of Virat came to secure captaincy as there were talks of giving limited-overs team’s captaincy to Rohit.

But, now Virat Kohli is going to miss upcoming T20 series against Bangladesh. Rohit Sharma has taken captain’s duties for the 3 T20 matches. He has a better record than Virat Kohli in T20 cricket. Rohit has captained India in 15 T20 matches and out of which has won 12. While under Virat India played 27 T20s, won only 16 and got defeat in 10 matches.

India vs Bangladesh T20 series is starting from tomorrow at Delhi. Rohit Sharma attended a pre-match press conference today. He said that team needs to do well in the T20 format. He said, “The first priority for us is to win games. And then focus on the rest. We have not had a great run in T20s. We probably are ranked number 5 or 6, if I am not wrong. I think five,” said Rohit as he looked for confirmation about India’s exact rank.

This is when someone from the journalists said India is no.2 in T20 rankings. Rohit added, “No, no. I am pretty sure. I do my homework pretty well, I think we are five, yeah. So that is something that we are really focused on and we want to get that number a little higher. We want to be at the top in all three formats.”

What position are India ranked in T20Is?

Rohit Sharma said that team India is not going to take Bangladesh lightly. He added that Bangladesh is going to play without their two main players Shakib Al Hasan and Tamim Iqbal but they have some quality players who can upset any side.