Ryan Burl smashes 34 runs in a single over

The record-breaking assault from Ryan Burl against Bangladesh includes 5 sixes and 1 four. 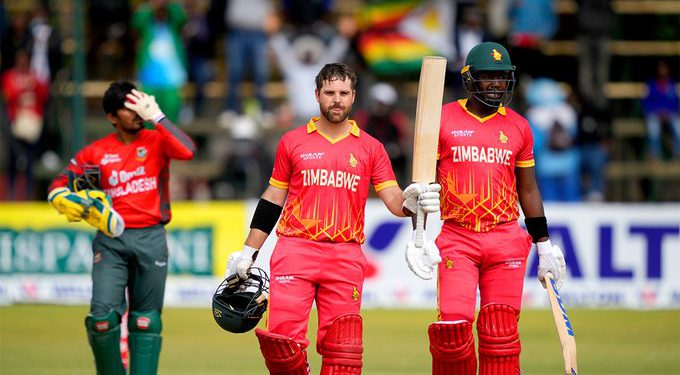 Bangladesh was all over Zimbabwe for the first fifteen overs of the 3rd T20 international between the sides that is presently being held at Harare Sports Club as the Zimbabwe outfit looked down and out at 6 for 76 at the 14-over-mark. Regardless, all-rounder Ryan Burl had some mischievous plans.

Taking the strike against left-arm spin of 27-year-old Nasum Ahmed, Burl decided to let his beast unfurl en-route his 28-ball-54.

The destruction begun on the  first ball of the fifteenth over as a full ball was sent soaring over long-off for a huge six.

The second ball was an overcorrected short ball, as Burl swivel-pulled it over deep square-leg for another maximum. Consecutive sixes had put Zimbabwe back on track. But this wasn’t about putting his team back on track. It was about creating records, which Burl succeeded at.

Nasum changed ends and went round the stumps to change his fate. But it didn’t really change as Burl smacked two more into the leg-side stand.

Following that, Burl struck an anticlimactic one-bounce four over the long-off region. Nurul’s last delivery –full and wide– faced a full-blooded swing from Burl sent it in a similar direction as the previous boundary.

Ryan Burl casually decimated the Bangladeshi outfit for 34 runs off a single over that saw no no balls and wides. He also took his side from a disappointing 5 for 55 at nine overs to challenging 156 for 6 at the end of the innings.

The record-breaking assault from Ryan Burl included 5 sixes and 1 four and sees him equal Tim Siefert’s record for scoring the second-highest runs (34) off a single T20I over. Now only Yuvraj Singh and Kieron Pollard have scored more than the Zimbabwe left-hander off six consecutive balls.

Burl has also shattered the all-time record for a Zimbabwe batter scoring most runs off a single over, bettering his own 30 off 6 that he scored against Shakib al-Hasan in 2019.

Huge pay-day at the Indian Premier League and a bat-sponsor seems to be within the touching distance of the Ryan Burl who, not long ago –along with his mates– struggled for sponsors and glued his broken cricket shoes by himself.