Suryakumar has yet to play Test Cricket for India and as per reports Test call-up is waiting for him. 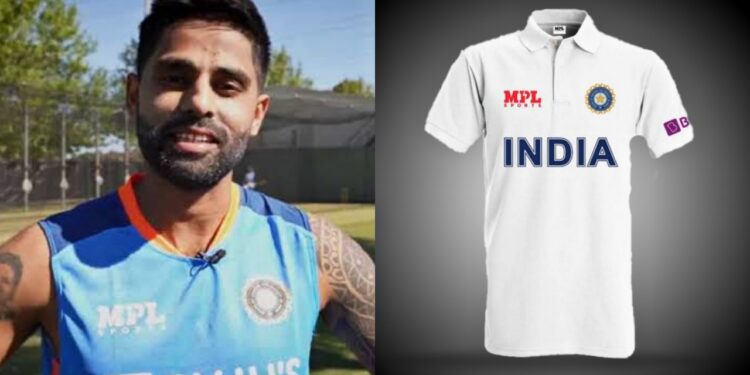 Suryakumar can be seen in white jersey (Pic - Twitter)

Team India’s aggressive batter Suryakumar Yadav is all set to get rewarded for his stellar performance in the last one year. As per the reports, Surya could be included in the Indian squad for the upcoming Test series against Bangladesh.

Team India’s front line all rounder Ravindra Jadeja underwent a knee surgery in September and hasn’t recovered yet. Jadeja is unlikely to attain complete fitness in time for India’s tour of Bangladesh in December for three ODIs and two Test matches even though he was selected by the selectors in both the squads.

“Jadeja has been to NCA for his check-up and rehab on a number of occasion. However as of now, it is unlikely that he will be fit for the Bangladesh series. In any case, Chetan Sharma-led former selection committee had kept him in the squad subject to fitness,” a BCCI source told to PTI.

Suryakumar Yadav is definitely on the top of the list to replace injured Ravindra Jadeja courtesy of his consistent performance in the shorter formats in the past one year. Yadav has a phenomenal red-ball record in domestic cricket having scored over 5,000 runs in First-Class cricket averaging 44.01. He has registered 14 centuries and 26 half-centuries to his name. The stats are clearly in his favour and was termed as a three-format player by former Indian head coach Ravi Shastri as well.

The Mumbai batter was a part of India’s Test squads for the away series against England and the home series against New Zealand, but he is yet to be included in the playing XI and not yet officially made his debut in red-ball cricket. His stroke making against both pace and spin makes him a serious contender for the middle order spot in the test squad.

ALSO READ: Joe Root enters his name for IPL 2023 auction; Aakash Chopra feels he is the next SRH Captain

Team India might be keen to introduce a few new faces on the Bangladesh tour. The Indian team is scheduled to play two Tests against Bangladesh. The first Test will be contested at Chittagong from December 14-18 while the final one will be played in Mirpur from 22-26.